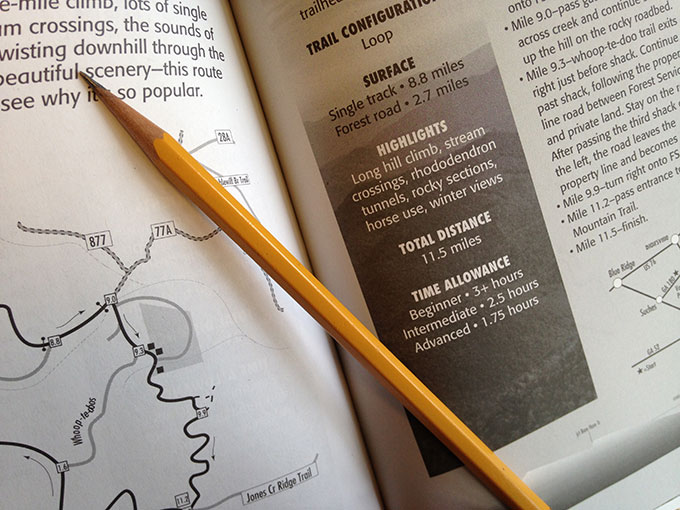 Whoop-te-doo. It’s a term mountain bikers use for an earth berm that’s been built into a trail, usually to prevent erosion, but sometimes to slow mountain bikers down as they descend a hill—a type of speed bump, if you will. The undulation creates a swooping, roller coaster feeling in the stomach. It also causes the excited “whoops” of riders as they go over the berms—hence the name.

Why write about whoop-te-doos? Because they’re a prime example of what an editor deals with when reviewing and correcting the manuscript of a new trail guide. Given the subject matter and sometimes remote geographical location, many trail names have unusual and alternate spellings, and often it’s hard to know what is correct.

Take Jim Parham’s new Mountain Bike Trails: North Georgia Mountains, Southeast Tennessee. In this book, at least one route in north Georgia’s Bull Mountain trail system includes a trail named after those berms. But how should it be correctly spelled: whoop-de-do, whoop-te-doo, whoop-dee-doo? Ferreting out the truth on this kind of detail can be a real challenge for a guidebook copy editor aiming for accuracy and consistency. In this case, an internet search revealed various spellings on different websites and different maps. I was in a quandry. Which spelling was the correct one?

Then it hit me. The author of this new book is also the author of the very first mountain bike guidebook for Georgia, Off The Beaten Track, Vol. III: North Georgia. In this guide, originally published in 1993, Jim had identified that then-unnamed trail on his map as having those berms, and later maps by others had simply named the trail after his markings, so the original guide was the place to find the definitive spelling. Voila: Whoop-te-doo Trail.

We copy editors are often accused of being perfectionist detail freaks, but that’s all part of our job. We like to do the research, and we like the closure of finding a satisfying answer. When it comes to outdoor adventure guidebooks, users deserve the same kind of attention to detail as readers of any other kind of literature. One veteran editor friend calls this labor of love “care of the word.” The truth is, attending to details makes any book easier to read and understand, and that’s what we’re going for. We’re not perfect and despite our best efforts we do miss errors occasionally, but we’re constantly striving to be as close to correct as possible.

All this to say that it sure makes my job easier to have original source material, in this case the earliest mountain bike trails guides for the region, so close at hand. Thanks, Jim!

P.S. Mountain Bike Trails: North Georgia Mountains, Southeast Tennessee will be available April 1. On the same day, Off The Beaten Track, Vol. III: North Georgia (shown in the photo above), will officially go out of print.