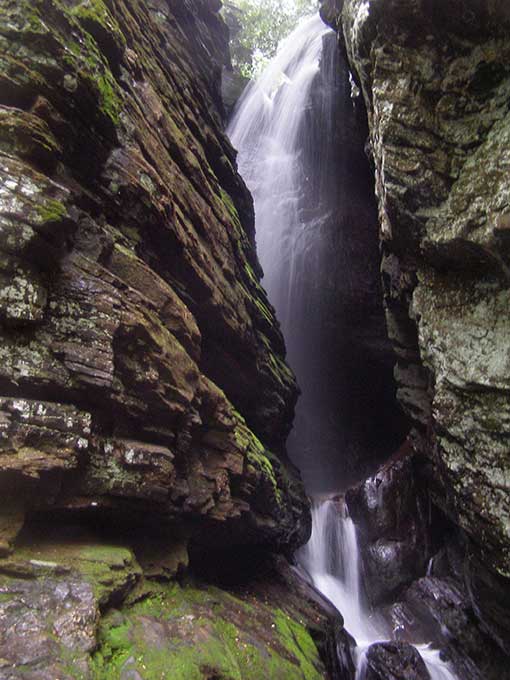 We’ve had a lot of requests for Jim Parham’s Waterfall Hikes of North Georgia this week. All the rain this spring has made for spectacular waterfalls in the region. That got us thinking: What defines a waterfall? To answer that question, here’s an adapted excerpt from the aforementioned guidebook. The first version was written by Thomas E. King and originally appeared in his Waterfall Hikes of South Carolina. We think this passage goes a long way to explaining what qualifies as a waterfall and describing the many different types. Note: the examples of each type listed here are to be found in Waterfall Hikes of North Georgia.

What Is A Waterfall?
A precise definition of a waterfall is difficult to find. Most dictionaries and encyclopedias refer to a waterfall as a more or less vertical stream of water that flows over the edge of a cliff that has eroded away. A waterfall is also sometimes defined as a cascade of water crossing rocks that have not yet eroded, producing what is commonly known as a rapid, although a cascade is a generic term for any flow of water. A small creek can be said to cascade downstream over rocks. A cascading flow of water can be any height, from a few inches to several hundred feet. Each section of a waterfall is sometimes referred to as a cascade.

Different sources set different minimum heights, ranging from 5 to 20 feet, for descending water to qualify as a waterfall. Other points to consider:

The following criteria are used to define a waterfall:

Waterfall Structure & Classification
Waterfalls are classified into the following categories according to the physical structure of the segments:

Many waterfalls are combinations of the segments listed above. For example, Upper Falls on Low Gap Creek (p. 162) starts with a slide, then ends in a plunge.

Rating Waterfalls
A useful rating system for waterfalls is as follows:

It’s important to note that the pleasure afforded by a waterfall does not correspond to its rating. Rating a waterfall is very subjective. Even falls rated only fair may be very appealing, depending on the perception of the observer.

Measuring Waterfalls
Many criteria used for classifying waterfalls are subjective. For example, the height of a falls is measured from the uppermost precipice over which the water flows to the lowest point of contact in a pool or stream or over boulders. However, what constitutes the base of a falls is often a matter of opinion. Most reported heights of waterfalls are only estimates. Even if the height were measured with sophisticated devices, the actual top and bottom of the falls would have to be identified before measuring, and sometimes that is not possible.