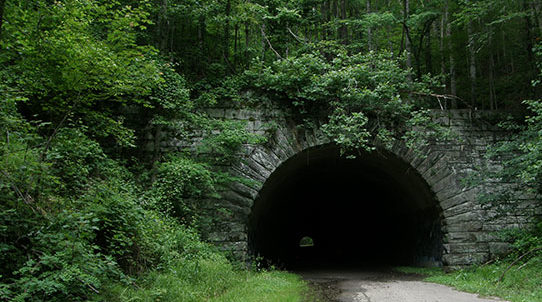 The North Carolina side of Great Smoky Mountains National Park is often called its quiet side. Perhaps most well known is Bryson City’s Deep Creek Campground and trailhead, but did you know there are two entrances to the Park at Bryson City? The second one doesn’t have a campground, but it does have a tunnel through the mountainside. Nine miles outside of town, that tunnel is 365 feet long and leads directly to the 33.5-mile Lakeshore Trail, which approximates the route of the North Shore Road, a proposed auto route through the Park that was never built. A section of Lakeshore Trail is also part of the longer Benton MacKaye Trail.

Danny Bernstein writes about the tunnel, and the trail, in Hiking the Carolina Mountains. The tunnel, she says, “is at the end of the “Road to Nowhere,” a remnant of Lakeview Drive, originally intended to replace NC 288,” the road into to the newly added northern end of the park which was flooded when TVA built Fontana Dam during World War II, creating the “north shore.” In the early 1960s, 6.2 miles of the replacement road were built from the tunnel entrance to the Park, but the project was halted when road builders hit acid-bearing rock that would cause serious water contamination.

“In December 2007,” Bernstein writes, “the Department of the Interior decided on a $52 million 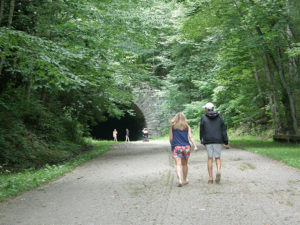 monetary settlement to Swain county instead of a road through one of the most pristine and untouched areas in the East. Though the Park is now protected and the North Shore Road will never be built, Congress still has to approve the funds to settle the 1943 agreement. Compensation to Swain county is slow in coming. For those who wish to visit cemeteries where their ancestors are buried, the Park service provides free boat transportation across the lake and a shuttle as close as vehicles can get to the cemeteries.”

The Road to Nowhere tunnel allows foot travel only, and it’s worth it to walk through. It’s also worth it to take a flashlight if you have one, Bernstein recommends, because it’s dark in the middle and otherwise you’ll literally be relying on the “light at the end of the tunnel.” And don’t forget to sing–the reverb is amazing. If you’re a wildflower enthusiast and continue along the trail, you can expect to see various plants in bloom in spring, summer, and fall. Jim Parham includes the Tunnel Loop in his Wildflower Walks & Hikes guide, due out in the spring of 2018.

As you go, remember you’re taking a walk into history.