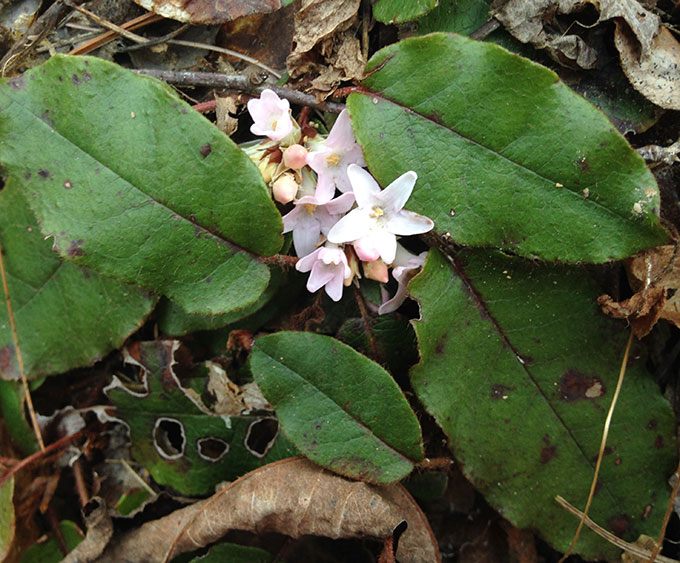 Yesterday we woke to snow. In the afternoon, we saw trailing arbutus in bloom. This fragile-looking early wildflower is much hardier than it appears.

Growing up in Vermont in the 1960s, I learned early that trailing arbutus was an endangered species in my home state. After that formative sighting, I didn’t lay eyes on it again until, as an adult, I moved to the Smokies.

Near a lake tucked in between Nantahala National Forest and Great Smoky Mountains National Park, I see this plant on trail walks every day in early spring. Its waxy, pale pink blooms are delicately scented and make a nice contrast to its evergreen leaves that lie close to the ground. Trailing arbutus (epigaea repens) is a member of the heath family, related to mountain laurel,  rhododendron, azalea, and blueberry. It prefers the secluded, shady conditions of the acid, xeric oak-pine forest. Where I walk, I notice it hugs a west-facing bank, clinging tenaciously to a steep slope that appears to be covered with nothing other than brown pine needles.

Trailing arbutus ranges from Eastern Canada to Florida, and from Kentucky to the Northwest Territories.It is the state flower of Massachusetts and the provincial flower of Nova Scotia. According the U.S. Forest Service, trailing arbutus “is considered common and secure through most of its range,” and “is known from twenty-nine states.” Other sources call it “endangered or vulnerable in Florida and New York” and note that it is made more vulnerable by the number of nature lovers who pick the flowers or dig it up in an attempt to move it to their home gardens, an attempt which almost invariably fails.

The truth is, trailing arbutus is notoriously difficult to cultivate or propogate. It is slow growing in even the best of conditions, and very sensitive to abrupt environmental changes—drought, flood, fire, logging, grazing, and yes, attempts to transplant. It’s one of those flowers the enjoyment of which is enhanced by its rarity and seasonality. I look forward to its annual appearance, look for it in the spots I know about, enjoy it while it blooms, and remember it fondly after it fades. To do anything other than that could threaten those annual sightings.

Although common names also include gravel plant, shadflower, ground laurel, mountain pink, and winter pink, perhaps the most frequently used one is mayflower, or Plymouth mayflower. It is said to be the first flowering plant that greeted the Pilgrims after their first harsh winter in the new world.