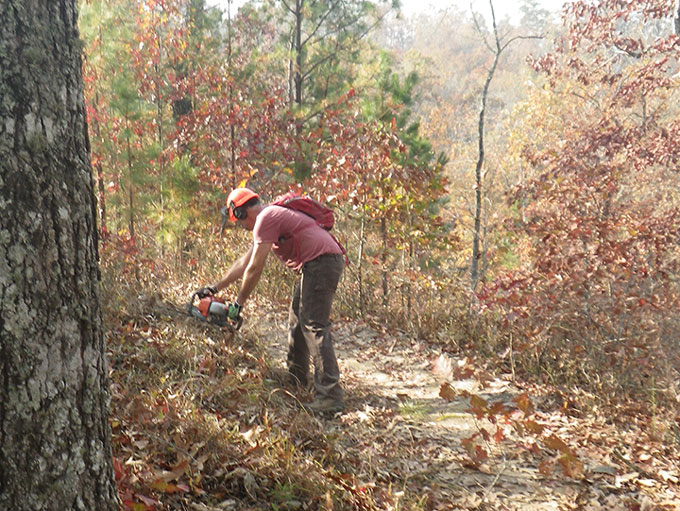 When mountain biking first came on the scene in the southeastern United States back in the late 1980’s, people could ride their bikes on almost any trail. Seeing a cyclist on a “foot-only” trail was a novelty for most people. As the sport took off in the early 1990’s, the novelty quickly wore off and the more traditional user groups began claiming turf. Near metropolitan areas, where the numbers of people far outweighed the trail resources, conflicts were inevitable. Threats of those conflicts eventually spread to the remotest portions of the forest as land managers began taking hard looks at what trails were suitable for which user groups.

Flash forward 25 years to 2016. Mountain bikers have learned a lot of valuable lessons. Bicycle clubs have evolved to include trail advocacy directors and work crews. Clubs own thousands of dollars worth of trail building tools. Most every weekend, somewhere in the Southeast there is a group of cyclists out repairing, or building, trail. The organization that all these folks look to—and most are members of—is called SORBA, which stands for Southern Off Road Bicycle Association.

On Sunday, November 6, our local Nantahala Area SORBA chapter spent half a day of maintenance on the Right and Left Loops of the Tsali Trails in western North Carolina. More than 20 volunteers showed up to clear back vegetation that each year encroaches on the trail—threatening to scratch legs and whack heads. It was hot, dusty work on a day when the air was filled with smoke from a nearby wildfire, but no one was complaining. In my crew, Andy Zivinsky wielded the brush saw and the rest of us followed with loppers, clippers, and rakes. As with most work parties, folks enjoyed the camaraderie, chatting away the hours as they did what was needed to keep Tsali trails in top shape for all users.