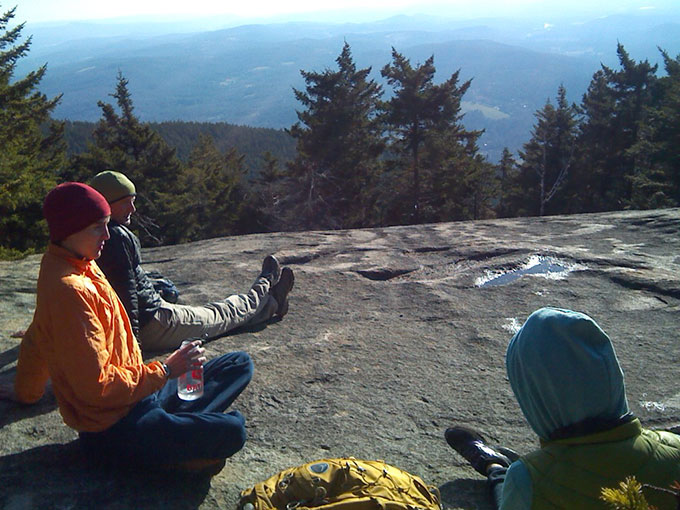 At about 3,130 feet, Mount Ascutney is not the highest mountain in Vermont or even in Windsor County, but it does stand out as a prominent landmark,  a solitary pluton sitting outside the Appalachian chain—a monadnock, in fact. What’s a monadnock? What’s a pluton? A monadnock is a rocky mass or small mountain that stands isolated in an essentially level area. A pluton is a body of igneous rock formed below the earth’s surface by the consolidation of molten rock. Plutonic rocks are typically crystalline and granitelike, and there is plenty of granite on Ascutney. According to Wikipedia, it gets its name from the Abenaki word Ascutegnik, “the name of a settlement near where the Sugar River meets the Connecticut River. The Abenaki name for the mountain is Cas-Cad-Nac, which means ‘mountain of the rocky summit’.”

We had the chance to hike this Southern Vermont classic again this year while visiting Mary Ellen’s family for the Thanksgiving holiday. It was bright and cold as we started out on the south face’s 2.9-mile Weathersfield Trail, one of four hiking routes up the mountain. Beech leaves were thick underfoot and although there was no snow, in places there were sheets of ice on the boulder-strewn trail; long icicles hung from the rocks. We passed two waterfalls, the most dramatic of which was Crystal Cascade Falls, where a brook rushes down the steep mountainside and falls abruptly off a high granite cliff. It made the perfect spot for a lunch break.

The forest turned from hardwoods to fir as we climbed, and the hills, farms,  fields, and villages of the Connecticut River Valley spread out below us. With such a view, it’s easy to see why Ascutney is considered New England’s premier hang-gliding venue. And while the ski area on Mo 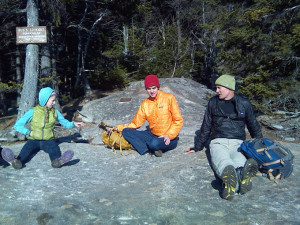 unt Ascutney closed in 2010, the mountain was once a popular alpine destination as well. It’s also a favored place to spot migrating birds.

The Weathersfield trail crosses Ascutney’s  west peak before reaching its summit and observation tower 0.3 mile farther on, but our favorite vantage point on the trail was Gus’s Lookout, where we sat in the sun on a wide swath of bare granite and admired the vista at the foot of the mountain. With so many routes to choose from and such a great setting, Mount Ascutney is a day hike well worth doing more than once.