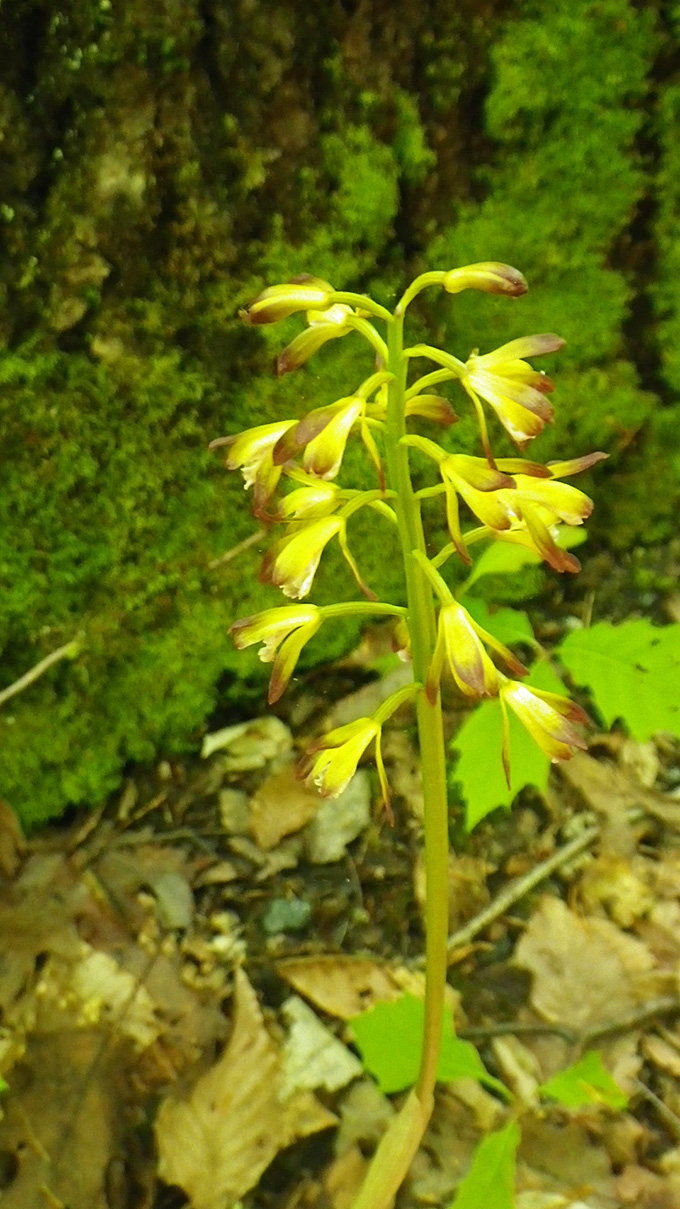 During January in the Blue Ridge, the year is still too new for blooming wildflowers. I’ve seen a few naturalized cultivated flowers showing their faces early—for instance, on a walk around Lake Junaluska last week a friend and I spied early purple crocuses in a sunny spot—but no native plants are yet showing their fresh blossoms in this frigid and unpredictable mid-winter weather.

While we wait, though, it’s worth mentioning a plant that puts out green foliage only in the winter. Although it doesn’t bloom until late spring, its leaves (and typically only one leaf) hug the ground in November and last until March, sometimes with remnants of dried seed pods nearby. After the leaves die back, the bloom stalk sprouts in May or June, with tiny blossoms in muted green, purple, and yellow. In winter the greenery is similarly unostentatious. If you don’t look for it, you’re likely to miss it altogether.

And what hardy plant could this be? You may be surprised to find it’s a member of the orchid 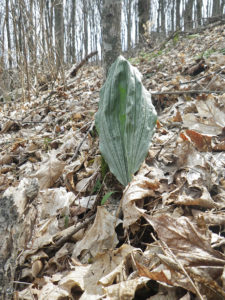 family. Puttyroot, also known as Adam and Eve (Aplectrum hyemale), also blooms in the Piedmont. Here in the mountains its preferred habitat is rich cove or mixed hardwoods forest. A close look at the dainty blooms reveals they very much look the orchid part. Why does it adhere to such a mixed up leaf-out schedule? Puttyroot likes to grow in shady places, and the one or two leaves per plant that show themselves in the winter can take advantage of sunlight that’s mostly unavailable in the summer.

The underground part of the plant is composed of two bulblike corms, attached by an underground stem. One corm bears the leaf or leaves, the other produces the bloom stem, and that’s where the Adam and Eve name came from. Its other name, puttyroot, is derived from the corms’ gelatinous quality, which made it useful as a kind of putty or cement for early settlers. According to Doug Elliott’s Wild Roots: A Forager’s Guide, it was used to glaze windows by those lucky enough to have them, and as an herbal base for medicinal poultices.

The Southern woods are full of interesting plants—some that we never notice unless we really stop and look. If you live in the North Carolina mountains, which support more than 2,500 native flowering species, you’ll likely never have a better chance to see them than right here, close to home.