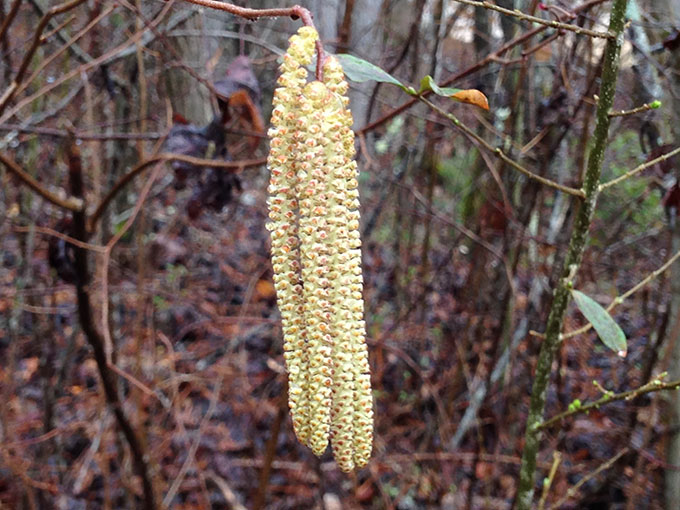 On a sunny Sunday afternoon this week, taking a favorite walk along the edge of Lake Fontana, we again saw unexpected wildflowers in bloom. It took a sharp eye to notice them; their yellow-green, tinged-with-brown, elongated shapes blended right into the winter woodland scene. Hanging from spindly twigs along the shoreline, they looked melancholy and vaguely Victorian, like something out of an Edward Gorey drawing. Measured by length they are quite large–at least three inches and sometimes as long as six. I knew they were called catkins; some were still fluffy with yellow pollen. What I didn’t know was the name of the plant that produced them.

Back at home I learned I was looking at 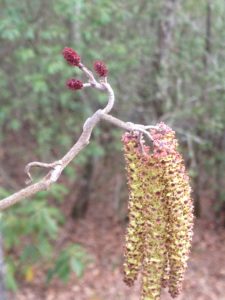 the male flowers of the smooth alder, alnus serrulata, also known as tag alder, common alder,  hazel alder and brookside alder. It’s no wonder I encountered them near the lake. This shrub, a member of the birch family, loves the water and thrives anywhere near it.  The female flowers often appear after the male and are pollenated via the wind; they start out purple-red and are tiny and upright rather than long and droopy. By the time fall rolls around, long after the male flowers have faded, they’ve matured into brown woody cones about a half-inch long.

Besides its flowers, the alder has some interesting qualities. It’s a family of more than 30 shrubs and trees that grow all over the world. Its name derives from the same root as the word elk—and also elm, a tree species distantly related to alder.  The seeds are so tiny that, according to the alder entry in World Book Encyclopedia, half a million of them may weigh less than a pound. The red alder is the most important species in the Pacific Northwest, growing to 130 feet high with trunks up to 30 inches in diameter. If alder has a plant superpower, it’s the ability to fix nitrogen in the soil, so it’s useful in land reclamation projects as a “pioneer species,” where it prepares the ground for the plants that follow it.

Alder is used for making furniture, but is also a popular wood for making the bodies of electric guitars, where it produces an evenly balanced tone. Its bark is traditionally used in leather tanning. And although I haven’t tried them, the catkins are reported to be edible (although bitter and unpleasant-tasting), and possibly rich in protein–something to remember if I ever need to survive in the woods.

Here in the Southeast, the water-loving smooth alder is the only native of the family. Its leaves are glossy and green in the summer and turn yellow and even red in the fall. Now that I know where it lives, it will be interesting to see the flowers develop and the leaves change through the seasons.