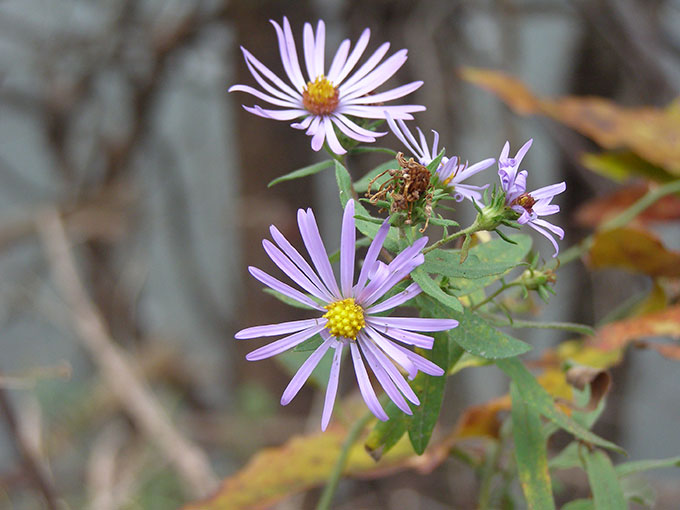 As October passes and we move into the late fall of November, we don’t expect to see many wildflowers. We tend to think it’s time for the tree foliage to shine and provide color on the ground—and perhaps a few bright spots left fluttering on branches. But when most wildflowers die back, there’s at least one that persists: the aster. We see its often tiny, typically light-purple petals around a yellow center, making delicate little explosions of color among the dried grasses and spindly seed pods as we walk the trails. It’s a humble flower, attractive in a homespun kind of way. What’s more, asters are some of the very first flowers to bloom here in the Southern Appalachian spring, as well–as early as some of the delicate ephemerals. It turns out there are many asters, and there’s a lot to learn about them.

Until the 1990s, all the nearly 600 aster species in the world were classified under the scientific name aster,  derived from the Ancient Greek word meaning star, regardless of whether they were found in Eurasia or North America. But after extensive research, according to Wikipedia, “it was decided that the North American species are better treated in a series of other genera.” Though mostly still known as asters, they now are grouped under asteraceae, which, interestingly, also makes them part of the sunflower family.

Robin’s plantain is one of the earliest asters, appearing in April, with the flower heads ranging from white tolavender with yellow-disc centers. They love to grow at the edges of trails, so are typically easy to spot when hiking. Like other asters, they serve as food for the larvae of butterflies and moths—the lynx flower moth particularly likes Robin’s plantain, which is also known as fleabane. At one time, the dried plants were used as mattress stuffing to ward off fleas and their bites. Another aster is pussytoes, flowering May through July. Like yarrow, it’s one that doesn’t have the star-like flower head, but nonetheless belongs to the asteraceae family.

Just the other day I caught sight of  a mountain wood aster, which has the more typical, daisy-like flower heads with thin petals. No surprise there—it is known to bloom here August through October, and appeared to be going strong in this long, warm fall we’re having. Lest we think this humble-looking plant is simple, it’s worth mentioning that according to Clemson University botanist Timothy Spira, mountain wood aster is a tetraploid, meaning it has four sets of chromosomes and is a variant of the white wood aster, which has just two. Spira says it “essentially replaces” white wood aster in higher elevations in the Southeast.

Asters are tough plants that can grow in all hardiness zones, and they span the seasons. Lucky us—we can expect to see them from the earliest spring bloom to the last flowering of late fall.