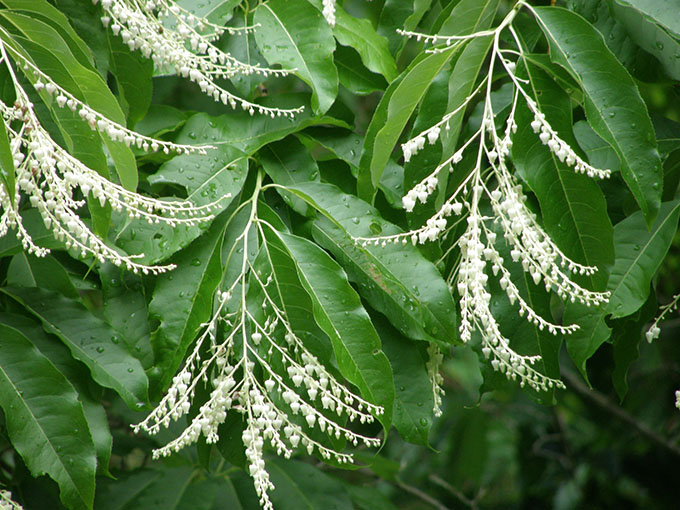 In a six-week summer window between mid-June and the end of July, tens of thousands of workers near our office are busy creating a rare Southern delicacy. Made in tiny batches in the smallest facilities imaginable and produced only in the region where North Carolina, South Carolina, Tennessee, and Georgia meet, its quantity and quality are highly dependent on the weather—so there is no guarantee of getting it every year.

Unless you know what to look for, blooming sourwood trees can go unnoticed  in the woods or driving down a road in the Southern Appalachians. From a car, flat white sprays of tiny flowers seem to cascade down the branches in a froth of white. Seen closer at hand, each bloom resembles a quarter-inch lily of the valley bell. On a hiking trail, sometimes the tiny blossoms littering the ground will cause a person to look up and see the sourwood trees all around. In our region of the country, honey crops are primarily produced not from fields of buckwheat or clover, but from flowering trees. Blooming tulip poplar and locust  in March and April produce a spring honey flow harvested around Memorial Day, but in the sourwood tree is queen of the summer forest. Here in our office we monitor the trees just outside our windows and note the progress of the bloom—hoping for good weather so the bees, who don’t fly when it’s raining, can do their work. It’s an exciting time for us, because in late August, after the honey has been sealed away in the hive, Jim literally puts on his beekeeper hat, the screen porch off the back of our office gets turned into a honey extraction workshop, and he spends several days decapping the wax comb and spinning the liquid gold out of its frames.

Sourwood honey was awarded gold medals at World Honey Shows in 2005 and 2009. Regionally, it is famous for its notably lighter and more delicate flavor in comparison to other local honey. Swain County, NC, where we live and where Great Smokies National Park bumps up against Nantahala National Forest, is historically famous for its sourwood honey; beekeepers have moved their hives here just for the “sourwood season” in order to produce a precious crop.  Sourwood trees are one of the early trees in the forest growth cycle, the last to bloom in the woods and the first whose leaves turn scarlet in the fall. The species abounds here—you only have to drive down the road to see it.

Sourwood honey is one of nature’s remarkable gifts. The trees produce the nectar, and the bees do the incredibly labor-intensive work of gathering and transforming it into a substance one and a half times sweeter than white sugar. While it takes an army of tiny insects to make the honey, humans have the easier job—taking it off the hive and extracting the finished product from the comb.