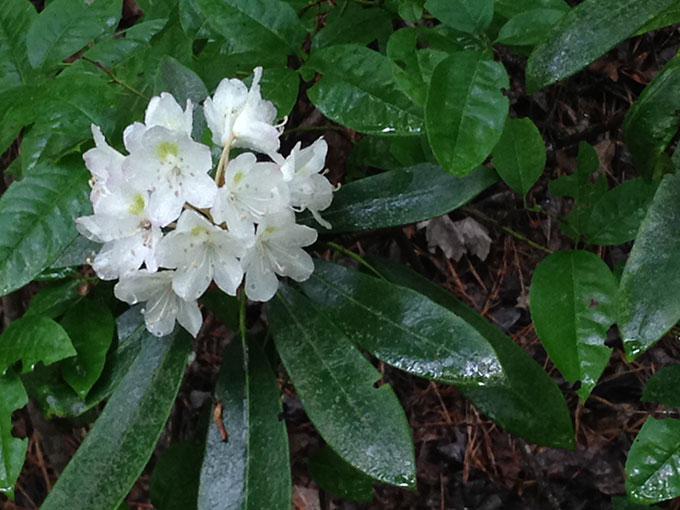 Once spring arrives in the Blue Ridge, it’s a non-stop parade of wildflowers blooming nearly everywhere. On show beginning in mid-June: rhododendron maximum or rosebay rhododendron. This is the tallest and showiest of the three rhododendron species native to our Blue Ridge Province. With large clusters of blooms and dark green leaves up to 10 inches long, it sometimes grows to a height of 25 feet. The flowers are typically white with yellow or greenish spots on the throats, but according to Richard Bir of NC State University, who wrote on the subject in 1998, they commonly bloom with a pale pink tinge at higher elevations, apparently due to cooler temperatures. When plants with pink flowers were transplanted to lower elevations, they bloomed white.

These plants prefer edges of the forest, and do best in partial shade in the piedmont and lower elevations (they thrive in full sun higher up). If you’re considering adding these natives to your garden, be sure to put them in a spot they will like. Besides partial shade, good drainage and acid soil is essential.

An interesting historical note is that rosebay rhododendron became more widespread in the region after the heavy logging that was done at the turn of the last century and when the chestnut blight further opened up the forest at mid-century. Thickets of this shrub can inhibit tree regeneration and growth of other plants by increasing the acidity of the soil and reducing light, water, and soil nutrients. On the other hand, these rhododenron “hells” provide excellent cover for wildlife.

Rosebay rhododendron is the most common rhododendron in this region and appears in many forest types, where it forms dense colonies in the understory. This giant of the heath family is blooming this week along the shores of Lake Fontana in Swain County, NC.