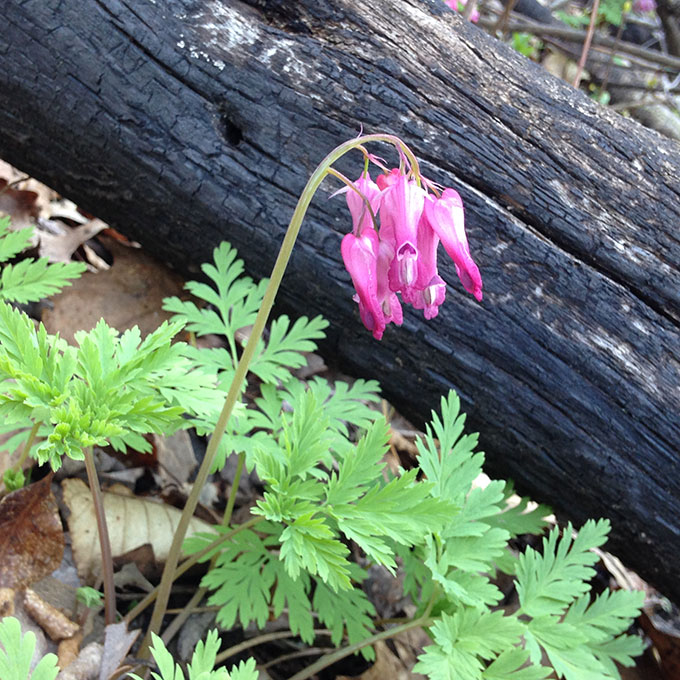 In the final months of 2016, parts of western North Carolina were in flames. It took weeks for firefighters to control the wildfires that raged through the dry woods. Many people evacuated thier homes, still more were on alert and ready to leave at a moment’s notice. Dry conditions made tinder out of the underbrush. In at least one case, a fire even crossed a river when wind blew burning embers across the water to a far bank. Smaller fires combined to make larger ones; firefighters arrived from all over the country to help. The air was filled with smoke and for days it wasn’t healthful to go outside. Across the state line on the Tennessee side of Great Smoky Mountains National Park, the town of Gatlinburg itself was ravaged by fire.

That winter, walks through the woods revealed patches of black in the landscape. Along the Little Tennessee River and in the Nantahala Gorge, fires had burned right down to the roads. The leaf litter and underbrush had been completely consumed. In some cases, rhododendrons still sporting green leaves had charred trunks, blackened to half their height. The smell of smoke remained. It was hard to know how—or whether—some would survive. What would be left to grow and bloom?

Eighteen months on, in 2018 the mountains of western 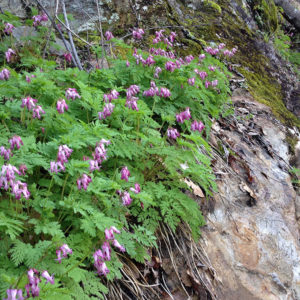 North Carolina have had a long, cool, wet spring. While some are ready for warmer weather, the cool temperatures have lengthened the season for spring ephemerals, those delicate early wildflowers that populate the forest floor before the tree leaf canopies provide shade from the sunlight. And this spring has also brought reassurance that flora in the forest flourishes after a wildfire.

Trillium always bloom brightly in the Nantahala Gorge, but this year they are particularly abundant where the fire burned the strongest. And beside the Little Tennessee, near where the fire jumped the river, there is a brilliant display of a wildflower not so commonly seen: broad swaths of delicate bleeding heart blanket the hillside in a display of mauve and green. Bleeding heart is related to Dutchman’s breeches and squirrel corn (they share the genus name of Dicentra), and is considered rare in the Smokies. It is certainly a rare treat to see so much of this plant growing in one place.

According the the North Carolina State Extension Service, benefits of wildfire can include the following: