As we enter the holiday gift-giving season, it’s time to shine some light on our wonderful local bookstore. This would be City Lights in downtown Sylva, NC. Over the decades, our relationship to the staff at City Lights has been multi-faceted. As a publisher, we have functioned as a vendor, supplying adventure guidebooks to the City Lights shelf since 1992 years. It’s been a thrill to walk in and see one of our books featured next to the register as the local title of the month. City Lights has hosted well attended events for our authors, at least one of which was standing-room only. The folks there clearly value regional and local writers and their works, and pay attention to them.

We are also customers of City Lights. The cozy reading spot in the corner behind the young adult books display was a favorite hang-out for our bookworm son Sidney whenever he had extra time to spend in Sylva, and the staff got used to seeing him there on a weekly basis during his grade school years. Chris and his people have been privy to many a birthday and Christmas present, including special-ordered Herge’s Tin-Tin books, a few each year, until Sidney had collected them all—and they would leave the free gift-wrapping untaped at one end so Jim and I could get a sneak preview before giving it! This early start spawned a lifetime love of graphic novels and books in general. I’ve lost count of the number of times browsing in City Lights has bailed me out when I was short on time and needed the perfect present—whether it was a book, a game, a blank journal, an upscale refrigerator magnet, or simply a beautiful card. I never know what I’ll find there.

The City Lights staff have always been willing to direct us to the store’s extensive used book collection
when we’re searching for an older title —and seem to have an amazing ability to recall what’s in stock there. More than once I’ve held an editorial meeting over tea downstairs in City Lights Cafe—so convenient and delicious. We think of the folks at City Lights as more than booksellers—we consider them friends. And as Chris has said, you never know what other friends you’ll run into there. 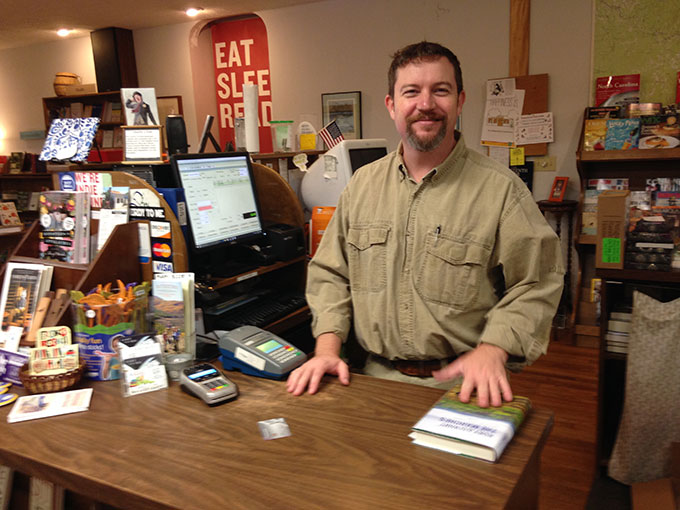 When I first moved to western North Carolina in 1978, I was amazed to see that neither Cullowhee or Sylva had a bookstore that sold more than textbooks and art supplies. Having grown up in a college town where the bookstore was a central highlight, it seemed to me to be a large void, not to mention a missed opportunity. But in 1985, author Gary Carden opened City Lights on Main Street. Two years later, Joyce Moore acquired it and moved it to the corner of Spring and Jackson streets, where it expanded and remains today. In 2010 the ownership torch was passed to long-time employee Chris Wilcox, who with his crew does a superb job in what can be a challenging retail environment. City Lights was listed this year in the Raleigh News & Observer’s “Best Kept Secrets” list of bookstores in North Carolina, and with good reason—it truly is a community centered operation. City Lights doesn’t even close for snow; staff live close enough so “someone will ski in and light a fire,” according to Chris. When the recent wildfires threatened homes in Swain County a few weeks ago and some neighborhoods were on evacuation alert, Chris emailed to see if we were okay, and assured us that if we needed a place to stay, there was one available for us in Jackson County (thankfully, the fires weren’t near enough to us for that to be necessary).

So here’s praise for our wonderful local bookstore. When you think of shopping local this season, consider your own local bookseller and all she or he adds to the community. And don’t forget: when you’ve waited a little too long, need to find a holiday gift pronto, and you’re stumped, it’s standing ready to solve your problems. Only 17 shopping days until Christmas.

The Winter Wildflower of the Red Maple

When we think of maple trees, we typically think of autumn. That’s when maples shine,…

Riding Out the Storm

Long power outages aren’t as common as they used to be in the Smokies, but when…