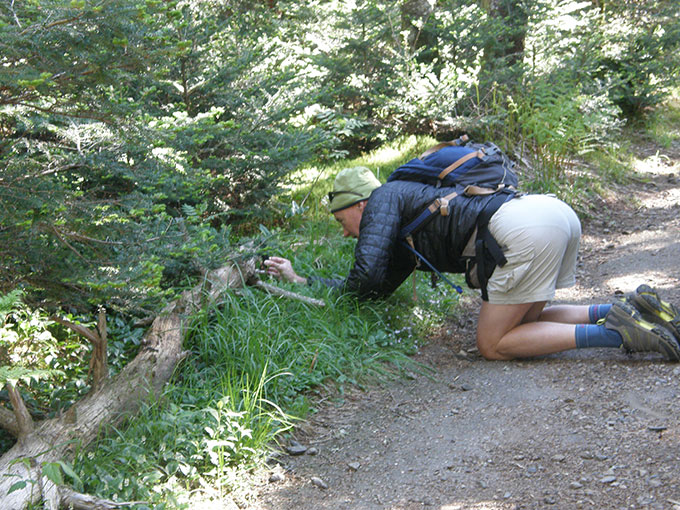 Most professional photographers, and plenty of serious amateurs, carry professional equipment. That means large tripods, SLR camera bodies, and bulky lenses. But many of us who hike to photograph wildflowers and other natural features don’t have the luxury of toting so much weight, or hiring assistants to carry it. Can you get good wildflower photographs with minimalist equipment? We’re here to say you can.

Both Jim and I use what most people could consider outdated photo gear. Since 2006(!) we have been using two versions of an Olympus SP-560UZ—a glorified point-and-shoot. They don’t make them any more. Mine is the heaviest and weighs just over a pound. With a permanently attached 18x optical zoom lens and a flash (which I seldom use) it has just about everything I need. Alright, the viewfinder is not what I’d like, but I’ve learned to live with it—the images themselves are sharp and clear. A few years ago Jim acquired a smaller Pentax WG1 which is waterproof and shockproof, and he carries two cameras. And then there are the phone cameras, which are pretty darn good these days. My iPhone 5c can sometimes capture images my stand-alone camera can’t, so I usually carry both. Jim’s phone is even older.

As for tripods, the only portable ones we use are 3- to 4-inch fold-up affairs that weigh next to nothing and slip into small daypack pockets. They bend like pretzels to balance on craggy rock surf

aces or have holes in the legs to slip parachute cord through—Jim has even used one to hang his camera from an overhead tree branch to get a photo. Shutter release cables are small and lightweight, but honestly, we don’t use them much. We improvise where we must to keep the camera steady, which for me often includes bracing elbows against my own ribcage and really paying attention to breathing—releasing the shutter on the exhale in marginal light conditions.

What about image quality, you ask. It’s true that if you’re going to enlarge an image significantly, razor-sharp focus is really important, and for that you might truly need a large tripod. But if your wildflower picture is going to end up in a memory book, as a medium-sized print, in a thumbnail index, on a website, or as part of a Facebook post or email, you can typically get it sharp enough to satisfy with a basic approach to equipment and doing what you can manually to get the shot.

Perhaps you’ve heard the adage, “It’s not what you’ve got, it’s how you use it that counts.” This certainly applies to equipment when it comes to photographing wildflowers.