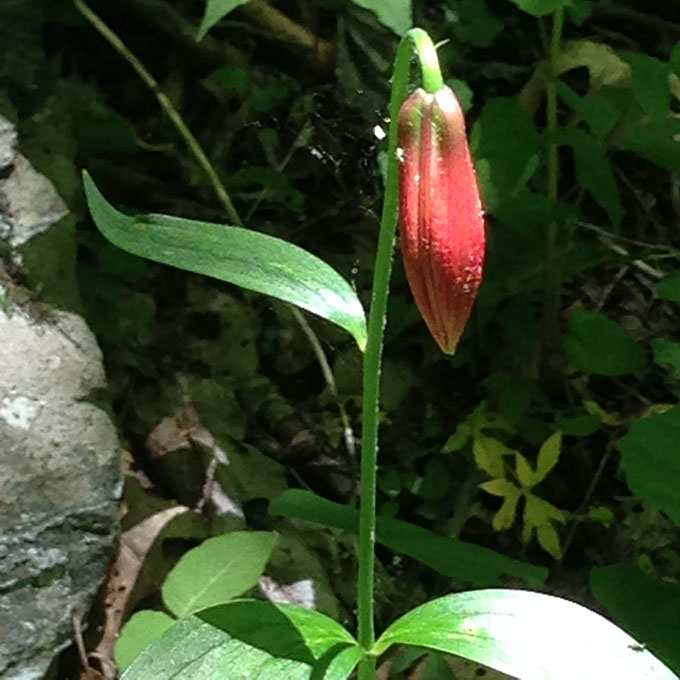 “Altitude determines weather, temperature, climate, the flora and fauna you will see, and the clothes you will need….climbing 3,000 ft. in elevation is the climactic equivalent of traveling 750 miles north, and the temperature drops one degree with every 250 ft. above sea level. The top of Mt. Mitchell—at 6,684 ft. the highest mountain east of the Mississippi—is 26 degrees colder than it would be at sea level (if the western Carolina mountains had any areas at sea level)….Different altitudes affect flora and fauna. At the lowest altitudes, spring flowers appear in early March. At 6,000 ft. elev., you can see these same species of flowers in late May.”

In the first half of June our hikes at Roan Mountain in search of wildflowers to photograph for a hiker’s wildflower guide Jim is working on turned out to be a great illustration of this principle. At Roan High Knob (6,286 ft.), we were at least a week early; few of its masses of rhododendrons had progressed beyond the bud stage. But at nearby Carver’s Gap (5,500 ft), though not at their peak, quite a few more rhodos more were in bloom, along with both flame azalea and mountain laurel. At our home location in the Smokies (1,700 ft.), the azalea and laurel had bloomed and faded weeks before. So if you’ve missed your target’s window of blooming lower down, there may still be a chance of finding it if you go higher up. It’s worth noting, too, that in the fall this schedule is reversed. That is, autumn wildflowers bloom first at higher altitudes and later at lower ones, due to an overall  shorter bloom growing season higher up. The same is true for fall foliage as the colors change.

And then there are the species that grow only in alpine environments.

Also at Roan Mountain, and at Elk Knob State Park (5,520 ft. at the summit), we were lucky enough to spot the rare Gray’s lily (a.k.a. Roan Mountain lily and bell lily), which grows only at higher elevations in these mountains. Again, we were a bit early. We saw the salmon-colored buds, but no blooms. And that’s the thing about wildflower photography—to catch your subjects blooming, you may have to make the trek more than once. Jim went back again a week and a half later, and caught the lily’s early stages of bloom.

Finally, there are wildflowers you’ll find in these mountains that also grow farther north in the United States. We saw Eastern turkeybeard two weeks ago while hiking from the Rough Ridge trailhead on the Blue Ridge Parkway near Linn Cove Viaduct. Turkeybeard is native to New Jersey, but infrequently found in mountains south to Georgia. We were amazed at how many of these frothy white spikes we saw in full bloom at Rough Ridge, right along the trail, on our way to the summit(4,773 ft.), which offered spectacular views of Grandfather Mountain. It was a steep, but relatively short, climb.