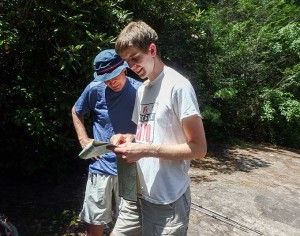 Jim Parham is out of the office at the moment—working, as he does each July, with summer camp counselors and their young campers. Here are a few of his reflections on sharing adventures with the next generation.

Right now I am sitting in my Crazy Creek camp chair watching six boys around a campfire. They are chatting away while busily adding wood to keep the blaze going. Moments ago they sparked flint and steel to start this fire. We were all surprised that that actually worked. Six more boys are circled around a sleeping pad, Magic: The Gathering cards laid out in front of them; an intense game is in progress. We are deep in western North Carolina’s Panthertown Valley at a beautiful campsite, right where Panthertown Creek and Greensland Creek come together to form the Tuckaseegee River. Here the water is stained a tannic brown from the high elevation bog just upstream. For July 6th it is pleasantly cool, not unexpected given our high elevation. Surrounding us are the cliffs and domes of Blackrock and Little Green Mountains. We’re a noisy group, but I can still hear birds chirping and insects buzzing.

Staring into the flames sends me back 10 years to 2006 when my son, Sidney, first attended Falling Creek Camp for Boys based out of Tuxedo, North Carolina. Since then both he and I have spent three to five weeks of summer at FCC. Some of the younger boys here tonight are the same 10-year-old age he was then. Those years have flown, and it’s hard for me to believe I’m here tonight with yet another group of boys. Twenty-year-old Sidney is here, too. He’s the one sitting right in the middle of the boys, leading the Magic game. Together we make up the staff for this backpacking trip of 12 campers, and I think having the opportunity to work together with my son in this way is pretty cool.

You might wonder, what’s a guidebook author and publisher doing working at a summer camp for boys? Shouldn’t I be slaving away behind a computer screen or out blazing new trails somewhere? If you know me, you know better than that. One of the perks that comes with owning your own business is also owning your own time. Sidney was so excited after his first summer at Falling Creek that his enthusiasm was catching. With my outdoor experiences and skills, finding a place for myself at camp was pretty easy—how could I resist? So for nine years now I’ve reconnected with my youth while training college-age counselors how to lead mountain biking and backpacking trips, and helping lead those trips myself. Partly it’s a summer break for me, but it’s also a great way to stay connected to the people who use Milestone Press guidebooks.

Over our camp years, Sidney and I have moved in and out of the same circles. When he was a camper,  I was working with the mountain bikers while he bounced from canoeing to backpacking to rock climbing. He loved just hanging out with his cabin mates, singing songs during Morning Assembly, and making new friends. The same year I switched over to backpacking, he was a Counselor In Training. That year we were both on FCC’s first far-flung backpacking trip to Colorado, he as a camper and I as the leader. On this Panthertown trip, it’s a different game entirely. He is a full-fledged backpacking counselor—and he is the one in charge of this trip. I’m just doing what I’m told (sure, I have to bite my tongue now and then, but he’s doing a great job). It is really fun to see how the boys look up to him.

The fire has died down now and most of the boys have wandered off to their sleeping bags. As you can imagine, it’s a whole lot quieter. Those chirpers and buzzers must have turned in as well. I think it’s time I climbed into my hammock; tomorrow we’re off in search of waterfalls. Before I do that, though, I’d better check in with the boss.

An Hour Before Sunrise

Over the course of a year, I spend a lot of time in the backcountry.…

Wildflower Touring on a Bicycle