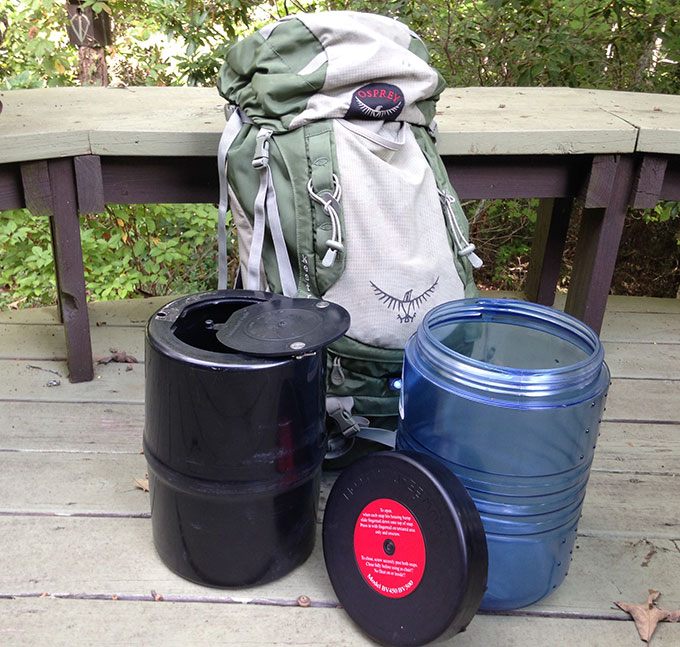 For years now, backpackers on the west coast have been using bear-resistant canisters for food storage while camping in the backcountry. Most of the national parks there (Yosemite, Sequoyah, Kings Canyon, Olympic) and many of the national forests require their use. Though they strictly enforce the requirement, they also make it easy to comply. If you don’t want to shell out the $60 to $100 to purchase your own canister, for a few bucks you can rent one from the land agency for your multi-day trip–usually when you pick up your permit. Remarkably, Jellystone (okay—Yellowstone) National Park, home to the notorious Yogi Bear and Boo Boo, has yet to adopt the policy. But it was the antics of bears, much like Yogi stealing those prized pic-a-nic baskets, and the poor practices of humans that brought this policy about.

A Short History of Bears, Backpackers and Food in the Western U.S.

Traditionally hikers out west, like most everywhere, carried their food in bags and hung them by rope from a tree at night to keep the bears and other critters from absconding with it. Correctly done, and known as “the bear hang,” the bags were placed ten feet off the ground and four feet from the nearest tree. This practice worked well for many years. But as the number of overnighter hikers increased substantially, there were a whole lot more aromatic and tasty treats hanging in the woods every night. As you can guess, not everyone did a great job with their bear hangs. And this just made it easier for the bears to get to the food. Bears, intelligent animals that they are, reaped ample rewards by figuring out clever ways of making off with the goods no matter how well it was hung. It wasn’t unusual to see mother bears teaching their cubs the tricks of the trade. Climb the tree, haul in or cut the rope, climb back down, snatch the food, and make the getaway. Yogi would be proud.

If you’ve never seen one, a bear canister is a hard plastic, barrel-shaped vessel with a lid that is all but impossible for a bear (or any other animal and some all-thumbs humans) to get into. Imagine a giant, child-resistant pill bottle and you’re getting the idea. They are heavier than the traditional “bear bag” and they certainly don’t get smaller as you eat up your food, but in my opinion they’re pretty awesome. They even come in super-light (and super-expensive) kevlar for those who will pay any price to carry a lighter load. No more looking for the perfect tree with a horizontal limb. No more hours spent throwing the line up in the air, hoping that this time it will go over the limb. No more getting ropes stuck and leaving them in the woods. No more wet, soggy bear bags after a night out in the rain. You just eat dinner, pack up all your smellies into the canister (including leftovers, empty wrappers, and toiletries), carry it a short distance  from your campsite, and you’re done—good night, see you in the morning. Heck, you can even use it for a camp stool. And, no more bears stealing your food.

The Southeast is Catching On

We in the Southeast are beginning to catch on to this idea. A couple of years ago, North Carolina’s Pisgah Ranger District began requiring bear canisters for folks camping in and around Shining Rock Wilderness. This super-popular area close to Asheville, was getting increasingly heavy overnight use. It was the same-old, same-old: the campers got sloppier, the bears got smarter. The policy has had a doubly positive effect. Now there are many fewer bear/human encounters, and overuse of Shining Rock by campers is also diminishing. At least for the time being, they would rather go elsewhere than purchase a container. Similarly, on the Appalachian Trail in Georgia through the Blood Mountain area, the forest service requires canisters during the heavy-use months of the spring AT  thru-hikers’ “migration,” March 1 through June 1. Proposals are on the books now to do the same for all the Appalachian Trail in North Carolina and in the popular Panthertown Valley near Cashiers. Good ideas spread, and whether you love bear canisters or hate them, required use is coming. With luck, our land agencies will begin offering them for rent here as well.