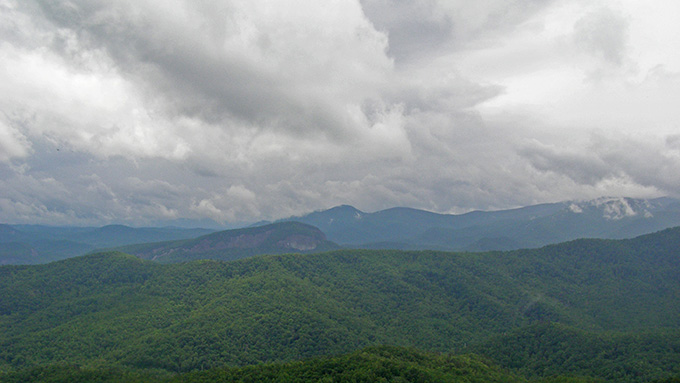 Over the course of the last decade I’ve spent part of each summer leading biking and hiking trips into the popular Pisgah District of the Pisgah National Forest. Most folks around here just refer to this area as Pisgah, but because Pisgah National Forest has three different districts (Appalachian, Grandfather, and Pisgah) covering a gigantic area from Brevard to Boone, finding the exact location of what I call Pisgah can be a little confusing to an outsider. Generally it is the national forest land lying between Asheville, Waynesville, and Brevard, bisected east and west by US 276 and north and south by the Blue Ridge Parkway. I think of Pisgah as my backyard and have seen it in all seasons and many moods.

“What do you think the weather will be like today?”

It has this nickname for a reason. From mid-May right on through August, chances are it will be raining somewhere at some time in Pisgah. Spend three days on the trail with dry weather and you can consider yourself very lucky—you might just want to drive the short distance over to the casino in Cherokee and cash in there as well.

Summer thunderstorms crop up most every afternoon like clockwork and can be epic. Sometime between 2 and 5 pm, seemingly from out of nowhere, the sky will turn inky black, the temperature will drop dramatically, the trees will start swaying. This is your cue to make haste for lower-altitude, tree-cover protected ground. You’ll have less time than you think, so get moving. Very soon the booming and crashing begins, along with a torrent of rain that quickly turns your trail into a mini river. With luck you’re not caught in a spot where the lightning is popping all around, but if you are, take cover. Spread out, ditch your pack, sit or crouch on a sleeping pad, and count those seconds between flash and crash. If you can count 15 or more seconds between when you see the flash of lightning and when you hear the crash of thunder, it’s safe to move on. If not, you’re safer waiting it out. The good news is, these storms tend to pass as quickly as they come on. Chances are, 20 minutes later the sun will come back out and things will get steamy once again.

That’s one kind of rain, and really the only kind that has immediate dangers. But in Pisgah the rain comes in many forms. There’s the “just before sunrise rain,” which is exactly what it sounds like— light rain, just as it is getting daylight, lasting about half an hour. It’s typically just enough to get all your gear wet before you pack it up. Then there’s the “all day rain”—again, self-explanatory. Steady, rarely heavy, and as the day progresses you just get used to it. The “all-dayer” is only marginally better than the “all-week rain,” which is in reality no fun at all. These come around every fifth summer or so, typically due to tropical depressions.

Some types of rain are associated with particular areas of Pisgah. You can have “the Shining Rock mist” —the wet clouds and fog than swirl through the treeless expanses of the wilderness area. There’s the “summer ice,” which refers to the hail that accompanies the thunderstorms at high elevations. And of course there’s the “entrance rain.” This is the one that occurs right at the entrance to the forest, a welcome-to-Pisgah sort of thing. It’s really just a quick splash—three cycles of the windshield wipers and it’s back to sunshine, leaving you with a feeling of—what was that all about?

Why all the rain? The fact is, Pisgah is in a rainforest. But it’s not one of the jungle types found along the equator. This one is known as the Appalachian Temperate Rainforest, which receives an average of over 100 inches of rain a year. Since Pisgah is located right at the top of the Blue Ridge Escarpment, all the moisture in the air coming up from the lowlands of South Carolina condenses when it reaches the North Carolina mountains, and Pisgah gets the brunt of it.

So—will it rain today in Pisgah? Of course it will. It’s the Pisgah—well, you know the answer.

Jim Parham is the author of numerous guidebooks from Milestone Press. You can read more about Pisgah Forest in several of them, including Hiking & Mountain Biking Pisgah Forest.