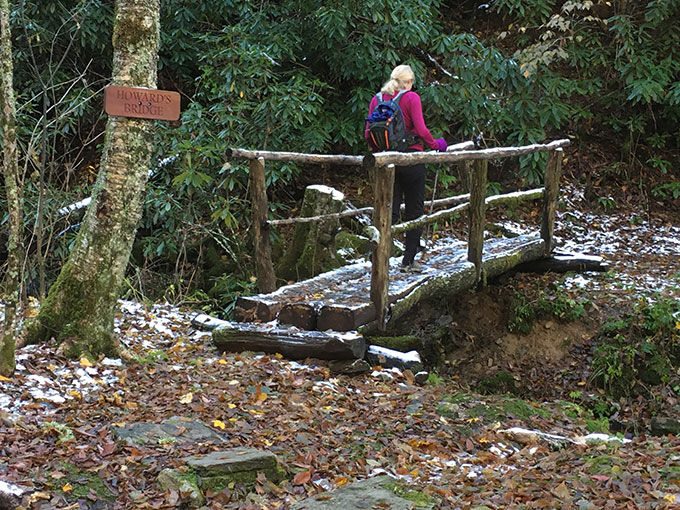 With this year’s warm, late, wet autumn, fall colors are just reaching their peak in western North Carolina, even at higher elevations. We’ve had a lot of rain, but last Saturday was cold and clear–the perfect time, we thought, to hike a short stretch of the Mountains-to-Sea Trail (MST) along the Blue Ridge Parkway.

The MST is a  long-distance footpath that stretches for over 1,100 miles from Clingmans Dome in Great Smoky Mountains National Park to Jocky’s Ridge State Park on the North Carolina Coast. While the route for the trail has been designated,  about 700 miles of it are currently complete. Its western end traverses some of the highest points in the state, including Waterrock Knob (6,293 ft. elev.), the tallest peak in its parent range, the Plott Balsams. This peak falls within MST Segment 1A, and is easily accessible from the Blue Ridge Parkway.

We began at Soco Gap (4,340 ft. elev.), where US Hwy. 19 meets the Parkway. Due to cold weather and some ice, the Parkway itself was closed. Our plan was to walk the trail to the Knob and back: a total of eight miles. This section of the MST follows the contours of the mountainside below the top of the ridge above the Parkway, gradually climbing for a total ascent of nearly 2,000 feet. 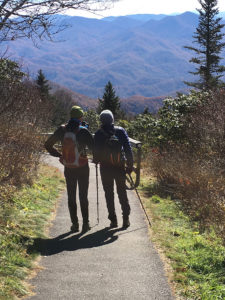 As we started off the temps were in the mid-30s, with traces of snow still on the ground in places where the sun hadn’t yet hit; we were bundled up in gloves, hats, and neck gaiters. On some rocky parts of the trail, thin ice coated the stone underfoot. As we headed uphill and built up body heat, our outer layers came off and sun visors replaced warmer headgear, but we still had to keep moving to stay warm. With most of the leaves still on the trees, openings in the woods revealed the warm yellows and golds of the distant mountainsides against the brilliantly clear blue sky. We passed from a northern hardwood forest environment to a spruce-fir forest, aromatic and thick with needles underfoot. The ascent was enough to make us feel energized but not exhausted–we were getting close. Stopping for a snack just shy of the Knob itself, we took advantage of a well placed bench with an excellent view.

Waterrock Knob boasts a partially paved path to the top with railings and steps–convenient for those who are arriving at its Parkway overlook by car and have only a relatively short climb to the top. Restrooms, and signage to help viewers identify the peaks along the far ridges, are right there at the parking lot’s edge. By the time we arrived it was closing in on high noon, and the bright sunshine made it feel like the heat of the day. We watched an occasional raven soar through the blue over head, and to our surprise, a butterfly fluttered in the breeze. 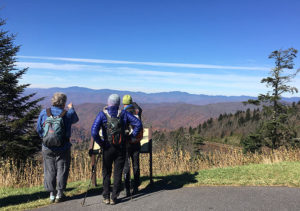 We could have retraced our steps on the MST as we returned to the Soco Gap trailhead. Instead we decided to take advantage of the Parkway closure to walk back on the road, where there was more direct sunshine, a more constant view, and the space for our party of four to walk abreast so we could hold a conversation more easily. What a day! Let the winter hiking season begin.

We are happy to announce that Milestone Press has a new home. After more than…