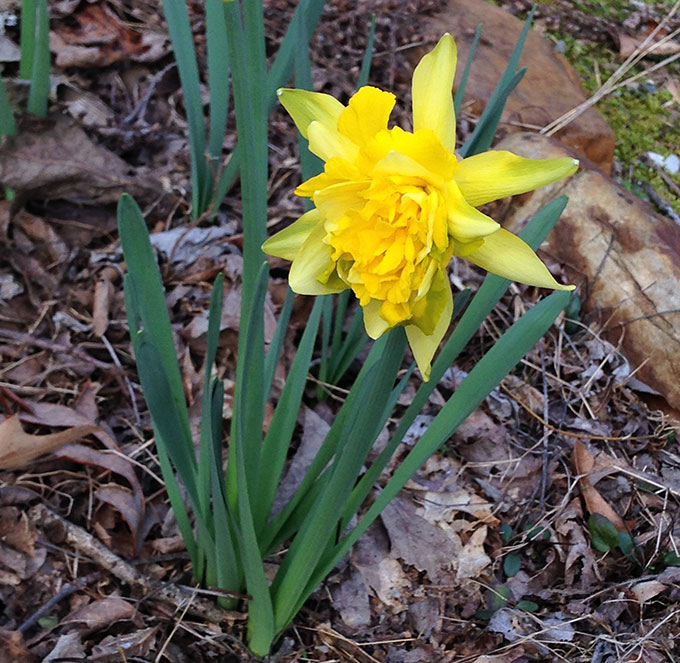 It’s been a warm winter here in the Smokies. And although we expect more cold weather in March, there’s reason to expect that unlike last year, it will be an early spring. The earliest spring flowers are already in evidence. Daffodils are blooming and golden forsythia blooms adorn the shrubbery.

It’s in times like these that we think about the old home places we’ve run across out on the trail, signs of a cabin occupied by mountaineers more than a century ago. Rustic and remote as they were, these sites are often recognizable even without the dwellings that once stood there, because flowers planted by the occupants continue to grow and bloom every season, whether there is a human to  tend them or not.

The daffodils—narcissus, jonquils, whatever you choose to call them—we see most are the old-fashioned kind, bright lemony yellow, not the ones with the showy ruffled trumpet blossoms, but with tattered-looking blooms  opening up from the center. The outer petals on these sometimes have a green tinge to them. They’re hardy early bloomers, standing up to frost and late snow, and lots of rain—they need no coddling to grow and thrive. And there’s very often a patch of them not far from a stone chimney in the woods, all that’s left (if there’s any structure left at all) of what was once a home for settlers.

Far back in the woods, it’s hard to imagine today how anyone could eke out a living there. Trees were felled by hand, earth was plowed with a mule, and hogs ran free in the forest, feeding on acorns instead of being penned up. Many times it was miles and miles to a main road. Settlers living in cabins were truly on their own—which somehow makes bright touches like the daffodils and forsythia planted there seem even more poignant.

Some old home places are easy to get to, others more removed. There are plenty of unnamed, undocumented old home sites along the trails of the Smokies and the Blue Ridge. Perhaps the best way to see them is to just to strike out on a trail and come upon one unexpectedly in the early spring, with only the flowers, and perhaps a chimney, to give them away.

If you need some ideas to get you started, here are some fairly easy-access hikes to home places listed in a few of our guidebooks.