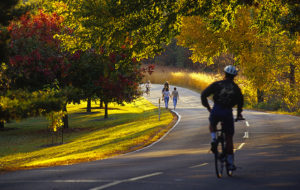 Because we live  and work in rural Southern Appalachia, we don’t often get to do much cycling in a city. But last month we experienced a distinct change of pace when we visited our son Sidney in Madison, Wisconsin.

Although it may be thought of by some as fly-over country, Madison has many charms for those who love the outdoors. Besides its beautiful lakes location, green parks, Capitol Square, and a farmers market said to be largest in the nation,  it’s a tech-forward university town known for its bike-friendly infrastructure. An extensive multi-use trail network makes the metro area’s rolling terrain highly accessible for two-wheeled travelers. 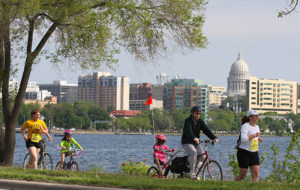 Sidney resides on the edge of Madison and lived there for more than a year without owning a car. Several times a week he commutes to his work in the suburbs by bike, a 15-mile round-trip. His weekend rides into the downtown area are about the same distance. Sidney has been following us on bike rides since kindergarten. During this visit he was our trip leader on a loop ride that headed out on the route he uses for his work commute and returned on a route he typically takes into downtown. Most of it was on municipal or state bike trails, and the rest took us largely through residential areas.

Our Saturday spin began on a main auto route, but quickly turned off into a quiet neighborhood. Soon after that we turned onto a paved bike trail (a stretch of the Ice Age Trail traversing a section of restored prairie) rolling through hills covered with sunflowers and goldenrod. We could only imagine the pleasures of seeing the blooms and foliage of spring and summer turn to fall during of a year of commuting by bike. We wheeled through wooded areas dappled with sun and shade, past cow pastures, farms,  and soccer fields. A straighter, more level stretch of another trail shared with dog walkers, runners, and other cyclists took us back toward Madison proper. 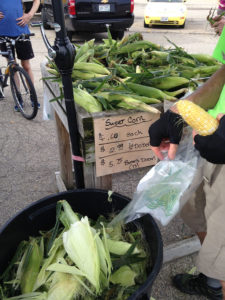 Navigating our loop route involved more than one convenient “bike bridge” overpass that allows cyclists to cross a 4-lane highway without encountering a single auto. One major intersection of multiple trails took the form of a traffic circle for bicycles. In the few places where it was necessary to cross a 4-lane with fast traffic, cyclists can press a button to activate flashing lights, alerting oncoming cars that a bike is crossing. The amount of planning and expense that has gone into accommodating bicycle travel is impressive. According to the Madison Area Transportation Planning Board, its network “includes 227 miles of streets with bicycle lanes or paved shoulders and 186 miles of off-street bicycle paths.” Countywide, there is a total of 244 miles of bicycle paths or trails. No wonder Madison consistently ranks as one of America’s most bike-friendly cities.

Bike riding in Madison can also mean picking up dinner fixings on your way home. As we returned through a bustling residential neighborhood, a farm stand set up at a convenient intersection offered a bounty of produce. We couldn’t resist stopping to buy half a dozen ears of fresh sweet corn to go with our planned supper. It was a lovely finish to a lovely ride. We look forward to biking again in Madison.

This week marks 25 years since we opened our publishing doors in 1991. That made us…

Getting Out of Our Backyard: Cycling Quebec’s Petit Train du Nord

We love where we live and work, but once in a while it’s good to…

Wildflower Touring on a Bicycle