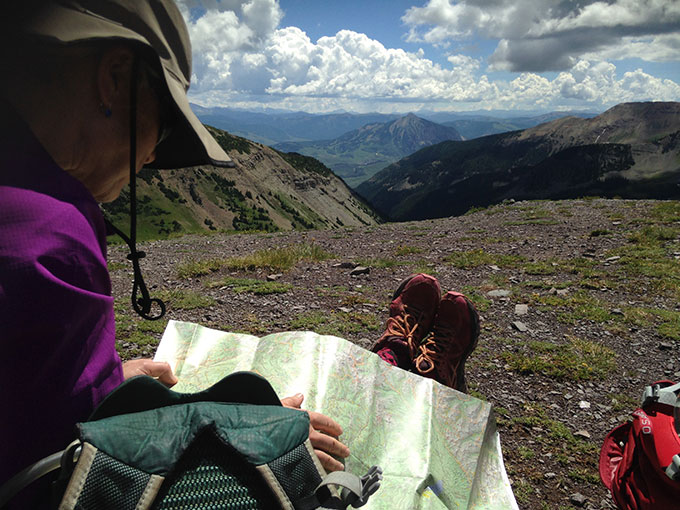 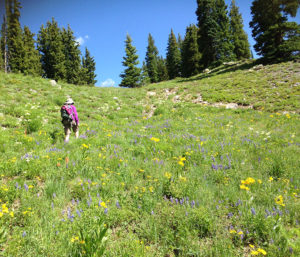 When it comes to trail adventures, for us there’s only one thing better than a good guidebook, and that’s local knowledge straight from the source. So I feel fortunate that in July I was able to visit my sister Barbara in Crested Butte, Colorado and rely on her extensive experience hiking in the Rockies. She’s a busy mother of two who also works as a home health nurse, but she made time for several day hikes with me, including to the top of Mt. Crested Butte itself. “Seeking the peak” of the Butte has its own story, but first we hiked to Scarp Ridge (elevation 12,216 feet) in the Ragged Mountains, starting from Lake Irwin, not far from Crested Butte town.

After heading up Kebler Pass, we parked our car at the solar shed near Lake Irwin Lodge and walked the mile to the trailhead on a dirt road. Once we began on the trail itself, we gained more than 1,576 feet of elevation over the nearly 2.5 miles to the top.

Crested Butte is known as the wildflower capital of Colorado, and its famous annual wildflower festival had just ended when I arrived, but above 10,000 feet those beautiful blooms were still putting on a show. It was the kind of landscape you’d expect to see in The Sound of Music. We climbed through alpine meadows of iconic purple lupine, golden mules’ ears, and corydalis fitweed (a.k.a. Case’s fitweed), which is listed as a threatened species but thrives in this region of Colorado. Barbara also pointed out a wildflower I’d never seen or heard of before: miner’s socks—a small, unlikely-looking bloom, so-named because of its funky scent.

The day had dawned clear and bright and the forecast was for good weather, but we nevertheless started in plenty of time to be “off the top by eleven,” a rule that refers to mountain weather patterns that tend to bring thunderstorms to high summits and ridges in the afternoons. As we approached the ridge the sun was still shining, but sure enough, clouds were beginning to build across the horizon. We ate our sandwiches at the best picnic spot I could imagine. 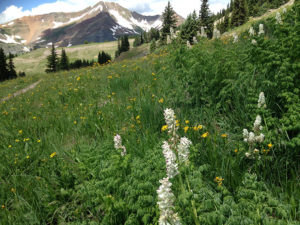 Behind us rose Ruby Peak and Mount Owen. Snow fields were clearly visible across the jagged horizon as we gazed toward Oh Be Joyful Valley. The blue bowl of Lake Irwin, edged in green spruce,  reflected the sky against the backdrop of the spectacular Anthracite Range on our descent. What a day.

This is a loop hike (sometimes called Scarp Ridge Middle Loop)  with an extension to the turnaround point, and is often described in a clockwise direction. We took the counterclockwise route, preferring to do the steeper section as the ascent. The entire loop from the trailhead (nearly 5 miles) took us about 3 hours. Including the walk back to the car on the road, it was a total of 7 miles, round-trip.