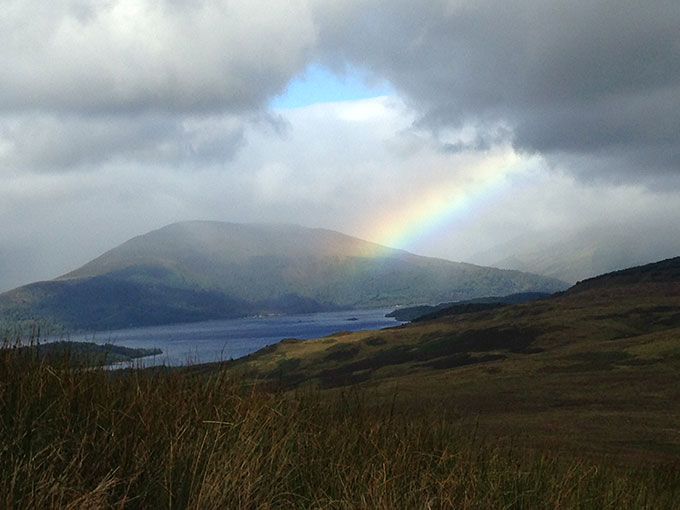 Call it a busman’s holiday. Some people may think we’re crazy to go hiking on 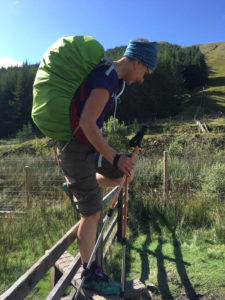 vacation. After all, hiking guidebooks are what we do for work. But we love the U.K., and it had been too long since we visited. We’d been waiting for the right time, and this was it. Time to see new territory and get in some trail miles; besides, it’s always fun to check out a guidebook by someone else!

The West Highland Way is a 100-mile long-distance trail in Scotland that extends from Glasgow to Fort William. Fifteen thousand people hike it each year, with an average of 200 setting out each day from one end or the other, and walkers coming from all over the world–college-aged to retirement-aged. Locally, an estimated 80,000 individuals use the trail annually. We saw many of them walking their dogs, running, and cycling along. The WHW also shares its track for a time with the newer John Muir Way and the Great Trossachs Path. 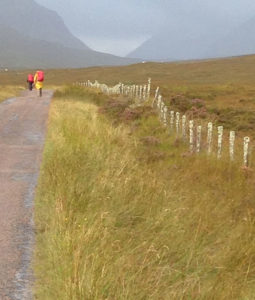 Compared to other treks we’ve done in New Zealand, Chile, and Greece, the WHW is relatively easy. Except for a few parts of a few days, the track is non-technical and quite a bit smoother than, say, the Appalachian Trail close to where we live. Truly steep climbs are few, but the terrain gets more rural and wilder as you go, crossing public lands like The Trossachs and Rannoch Moor.

If the scenery sounds romantic, it is. Windswept heath, magical deep-green forests that look as if they haven’t changed since medieval times, rainbows hanging over sunlit lochs, raging waterfalls in spate, wildflowers blooming in bucolic hedgerows, highland cattle and sheep on the trail. In Scotland there’s no such thing as a trespassing law, and never has been–it is completely legal for anyone on foot to cross any landowner’s property. As a result, the WHW traverses lands managed by the government as they overlap with large privately-owned estates, 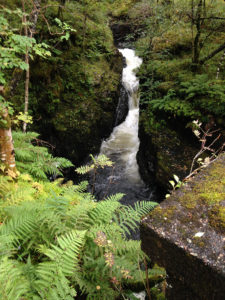 and there is typically signage indicating a strong partnership between the two. At one point, as we walked along the legendary banks of Loch Lomond ,we passed a high crag with a pile of gigantic boulders said to have been used by both Rob Roy and Robert the Bruce for holding cattle and hostages. It’s located on land owned by the Earl of Montrose (and Chieftan of Clan Graham), whose ancestor was Rob Roy’s sworn enemy.

September is traditionally one of western Scotland’s dryer months, but not this year. We had just one day when it didn’t rain, and during our 8-mile crossing of lonely and remote Rannoch Moor it rained and blew all day long–thankfully at our backs. The next day it blew in our faces as we walked up and over  “Devil’s Staircase” out of Glen Coe, and whipped at our clothes at the top of the gap before we descended into Kinlochleven, a 20th century aluminum mill town that’s reinventing itself as an outdoor adventure sports venue. We got used to having wet feet, were grateful for our waterproof jackets, and just enjoyed the dramatic scenery that comes with inclement weather conditions. 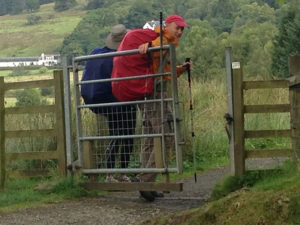 bed at the end of the day. Although we carried all our own gear (some walkers have their bags transported), we did stay in hostel lodging or B&Bs each night. Some walkers camped in the rain, so we were somewhere in the middle on the luxury scale. Many of the lodging establishments have drying rooms for wet boots and outerwear. Our first youth hostel was once a beautiful old former hunting lodge, still owned by the aforementioned Earl of Montrose. One inn was a centuries-old, thick-walled establishment where William Wordsworth was once a guest. We slept well at every one.

Mileage-wise, our shortest day was 8 miles; our longest day was 16-plus. Many walkers do a 20-mile day to complete the WHW in 7 days; we took 8 days and were glad we lengthened the trip. In fact, we have no regrets at all about our choice for a lon 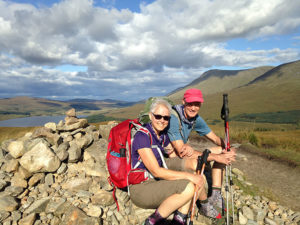 g hike. We’d do it again in a heartbeat–rain or no rain.

So after a week of walking, what did we do next? We were off to Wales for a 7-day cruise of the Llangollen Canal on a hired narrowboat–very little foot travel required. But that’s another story.