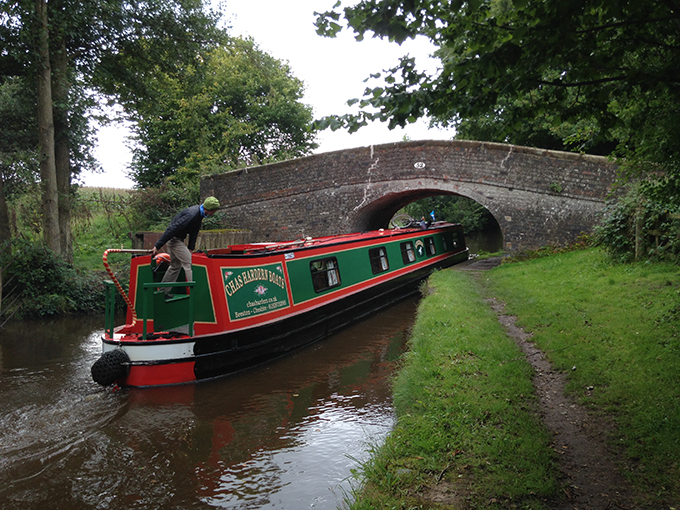 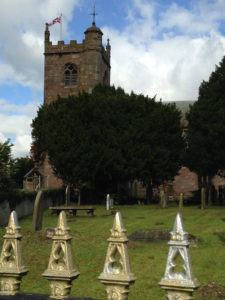 We thought it might be relaxing, possibly even sedentary–and we couldn’t have been more mistaken.

After 8 days of walking on Scotland’s West Highland Way, we decided on something completely different to follow: a week on a self-piloted, hired narrowboat on the U.K.’s most rural man-made waterway, the Llangollen Canal.

Canal boating is a favorite vacation pastime of the British, and as we discovered, many Australians and New Zealanders as well. The U.K. has a well-developed canal system that was originally created for industry but is now used almost exclusively for tourism. We chose a 50-mile stretch on the Llangollen Canal for two reasons: it runs through rural countryside, and it passes through the Pontcysyllte Aqueduct, a stone-arch structure that carries the canal–and canal boats–across a 1,000-foot iron trough spanning the River Dee and its valley, 162 feet below.

We picked up our 65-foot-long, 7-foot-wide (6 feet on the inside) vessel in Beeston,and after a few hours of orientation and training, we were set loose on the canal. We learned how to work the rack-and-pinion mechanisms of the locks (cranked manually with a windlass) right away, and slowly got used to steering with a tiller. Our first night was spent moored behind the old pub where we stopped for supper. 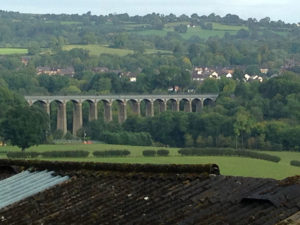 With a 7-day, 100-mile round-trip route to the town of Llangollen planned, our strategy was to move out to the turnaround point as quickly as possible and take our time on the return. The first days involved the excitement of staircase locks (4-5 locks in quick succession), learning the subtleties of negotiating a long and narrow boat that takes a long time to slow down and stop through bridge openings not much wider than the boat (and often on a curve), dealing with current from a lock’s tail race, and the etiquette of passing oncoming craft.

The scenery on the Llangollen Canal is almost unbelievably idyllic: farms,hayfields, sheep and cattle pastures, and the bridges themselves, which are of a scale that reminded us of Middle Earth–small and beautifully constructed of brick or stone. The towpath was also used by anglers, farmers with their sheepdogs, runners and walkers, and occasionally bikers. A great grey heron flew ahead of us for a quarter-mile one day, and more than once a kingfisher, flashing turquoise and rust, accompanied us as we passed through his territory.

Although September is typically a drier month in the U.K., this year it was very cool and damp. It poured rain occasionally, but mist and showers were frequent. We hung our rain gear near the hatch for easy access, putting on and shedding layers repeatedly as the sun came out and went back in again. 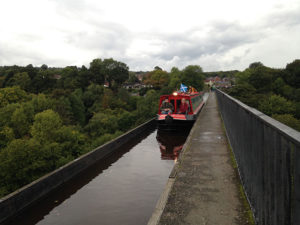 We reached the beautiful town of Llangollen on the fourth day, and in the process crossed the aqueduct twice, going and coming. It was a remarkable experience each time, and we now know why Pontcysyllte is a World Heritage site. A few fun facts: the seams in the iron trough which forms the aqueduct are sealed with (are you ready?) Welsh flannel and lead dipped in boiling sugar. It was built in 1805 and still leaks very little.

As planned, we took more time on our return and did some exploring on foot. Our walking destinations ranged from the medieval to the whimsical: 13th century Chirk Castle, St. Margaret’s Church in Wrenbury with its 15th century Norman tower, and the giant straw Peter Rabbit sculpture erected by Snugbury’s Ice Cream to commemorate the 100th anniversary of Beatrix Potter’s children’s books. We ran short on time and had to view Beeston Castle (where legend says Richard II hid his treasures in a 100-meter-deep well) from a distance. Then it was back to the boat hire to say goodbye to the craft that had doubled as our lodging and our transportation as we cruised to Wales.

So if we’d thought we’d have a sleepy, lie-back-and-read-a-book 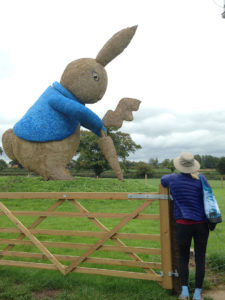 experience on the narrowboat, we were wrong. Good piloting takes constant attention, and active participation from the crew is a requirement to navigate smoothly through the locks and under bridges. There was never a dull moment! And that’s the way we like it.

Narrowboating is a very special way to travel and view the landscape. We’d do it again anytime.

Walking Into History on the Road to Nowhere

The North Carolina side of Great Smoky Mountains National Park is often called its quiet side.…

Backcountry Skiing in the Smokies

Photographing Wildflowers in the Southern Appalachians—Part 1: Consider the Altitude

If you want to photograph wildflowers in the Southern Appalachians, you have to go where…