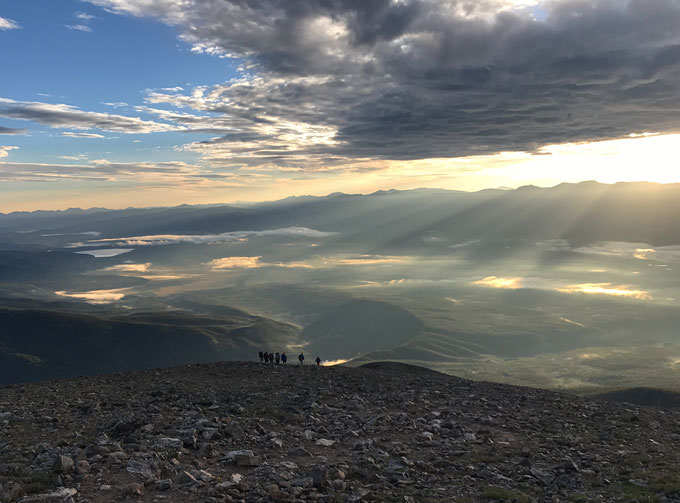 I admire people who get up early. In my opinion, they get to experience the best part of the day and can accomplish more by sun-up than other folks do by sun-down. I don’t always get up early, but when I do, I feel pretty good about myself. Now here’s the thing. There’s early and there is early. One of my brothers-in-law is a New England farmer who gets up every morning well before daylight—4 am or some ungodly hour—to do his chores. Did you get that? Every morning. That’s early; maybe too early. I admire him, but I don’t aspire to that schedule.

I almost always get up early when I have some outdoor event planned. When doing book field research, it’s not uncommon for me to rise at 4 am or 5 am, step into the clothes I laid out for myself the night before, hop in the car, and drive to some distant trailhead. Traffic is typically light or nonexistent, and if I can be on the trail and moving shortly after sunrise, I feel I’m getting maximum use out of the day. If I’m camping in the woods on a backpacking trip, I tend more toward going to bed at sunset and waking at sunrise. It’s nice to get up with the birds (who could sleep through their morning chorus?), pack up my gear, have a cup of tea, eat a quick breakfast, and be on my way.

Full disclosure here—I think I get some sort of sadistic pleasure from waking my companions up early as well. I recently lead a camp group of teenage boys on a backpacking trip through the Collegiate Peaks Wilderness in Colorado. We spent six days hiking on the Colorado Trail and the Continental Divide Trail, climbing through high passes, walking along raging snowmelt streams, and tramping through stands of quaking Aspens. On the last day our plan was to hike to the summit of Mt. Elbert. At 14,439 feet, it’s the highest peak in Colorado and the second highest in the continental U.S.—lower than Mt. Whitney in California by only about 60 feet.

From the beginning, I had told the boys that we’d need to get an early start. We’d seen thunderstorms around most every day of our hike, and the last place you want to be when lightning is flashing is the highest peak in the Rockies. So, on the day before the big assent, and with a smile on my face, I announced we’d be getting up at 3 am. That’s really, really early for a teenager. I’m sure they were more accustomed to going to bed at that hour than getting up. But as teenagers often do, these boys surprised me. They were all for it.

Here’s how it went. The night before, we did as much as we could to prepare—filling our water bottles, packing a light pack (we’d leave our heavier gear behind at our campsite), making sure our headlamps had fresh batteries, and placing our bearproof canisters where we could get our snacks out quickly and efficiently in the dark. We went to bed early, but with the excitement of the coming day, sleep came late and was intermittent.

As planned, we were up and on the trail hiking by 3:20 am. Daylight was a long way off, but the stars were out. We could see the lights of Leadville over our shoulders far below. Hiking with our headlamps tunneling into the dark, the steep, rugged climb didn’t seem so tough. By sunrise we were above tree line and moving well, though breathing a bit heavier in the thin mountain air. Our bodies now fully awake, the excitement of the early start had stayed with us in the dark and was just wearing thin, but the summit was in sight.

At 6:45 we were all standing at the top of the highest peak in the Rockies. It was, as the boys would say, truly awesome. The sun was bright, the wind freezing, and we had the entire summit to ourselves. In the cold we didn’t stick around long at the top, and soon headed down the way we’d come. Where we’d earlier been near crawling and sucking air, we now skipped along, singing, and wondering how many people we’d pass on their way up. That turned out to be a whopping 189 aspiring peak-baggers—a real crowd.

We all were smug as could be to be headed down the mountain. You see, we’d gotten up early—obviously, they had not. We had achieved our goal by getting a jump on the day. Everyone else was still trudging up. By 9 am we were back at our campsite with a whole day ahead of us to pack up our gear and hike the last few miles to the trailhead.

Jim Parham is the author of more than a dozen adventure guidebooks published by Milestone Press. Since 2005 he has been leading adventure trips across the country for Falling Creek Camp for Boys in North Carolina.

Jim Parham has been out on the trail this spring, doing field work for a…

At Milestone Press we're fortunate to work with a number of experts on outdoor adventure.…

Oconee Bells are blooming now. This elusive early spring wildflower is found only in a…