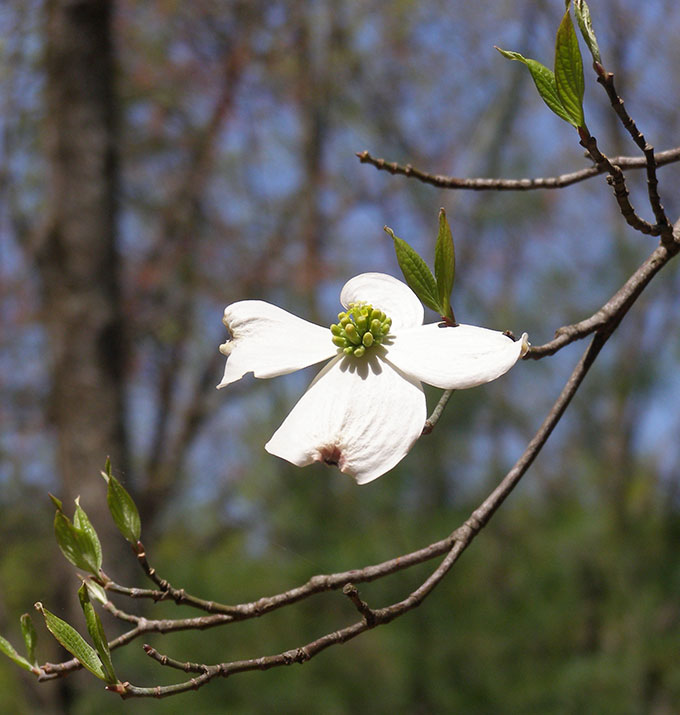 What is Dogwood Winter? What is Blackberry Winter?

Spring will come eventually, but this year it’s hard to tell when. With temperatures yo-yoing throughout the late winter (a frigid January followed by a warm February), now in late April we’re still getting blustery cold days and hard frosts at night here in the Southern mountains–which feels odd as the weather warms and the trees begin to leaf out. “Dogwood winter” and “blackberry winter” are terms that are being bandied about a lot lately. But what do they mean (are they the same?), and when and how did they originate?

Dictionary.com defines dogwood winter as a noun (a “South-Midland and Southern United States Americanism” to be exact), meaning a short period of cold weather in spring. Its known origin dates back to 1910. But how did it get its name?

The Old Farmer’s Almanac provides more information on this. It describes this spring phenomenon as a weather “singularity,” an event that happens in more than 50 percent of spring seasons (Indian summer is another such weather singularity that occurs in the fall). According to the Almanac, farmers knew it wasn’t safe to start their spring planting until after the dogwoods bloomed. In the case of blackberry winter, there’s apparently a botanical explanation; a cold snap is required for blackberry canes to start growing. There are other, less commonly used names for this “little winter” that seems so out of place: redbud winter and locust winter (referring to other trees that flower in early spring), whipporwill winter, and linsey-woolsey winter.

Dogwood winter usually comes in late April or early May, 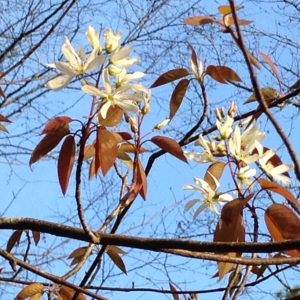 just as we’re really getting used to the warmer temperatures. It’s also when those lovely white dogwood blooms seem to hang like etherial clouds of popcorn in the otherwise stark forest. But, as the Almanac notes, “Which name you choose depends on which kind of tree is most abundant in your neck of the woods.”

One final note regarding dogwoods. Serviceberry, another large shrub that flowers in the forest, is a traditional harbinger of Easter and its bloom can overlap with dogwood. From a distance it can be difficult to distinguish the two flowers, but at close range they are quite different (see photo at right). The gracefully curved white parts of the dogwood bloom are bracts that look like petals, surrounding the tiny green actual flower in the center. Conversely, serviceberry petals range from white to pale pink, are much more slender and delicate, and can have a tattered appearance. Also known as shadbush, this shrub typically blooms earlier than dogwood while the weather is still colder, and presumably that’s why there’s no such thing as a “serviceberry winter.”

For more information on which flowering trees bloom in spring, when they bloom, and their preferred habitats, see Jim Parham’s Wildflower Walks & Hikes: North Carolina Mountains.

Milestone Press may be an outdoor publisher, but not all our work—and not all our discoveries—happen…

Wildflowers Blooming in December in the Smokies

by Danny Bernstein What does it take to get grandchildren on the trail? Where's the…