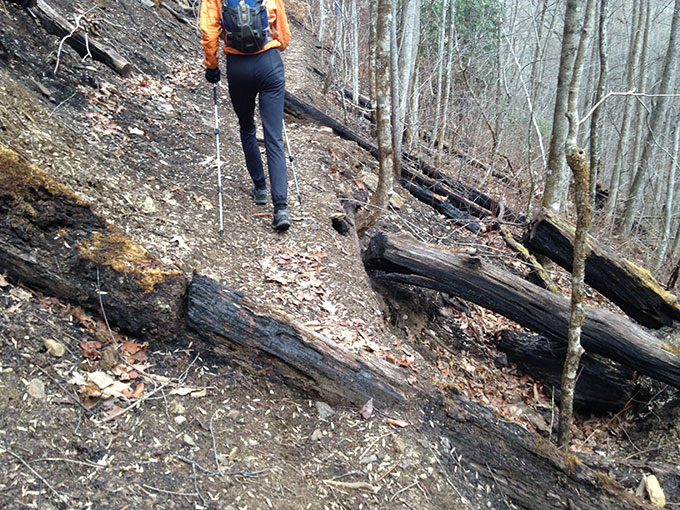 The year was drawing to a close. The weather for the first day of 2017 looked iffy. So December 31 seemed the perfect time to hike to the nearby Wesser Bald Fire Tower in Nantahala National Forest to survey the damage wrought by the wildfires that raged across the Smokies in November and early December. Unlike Gatlinburg and the Tennessee side of Great Smoky Mountains National Park, the North Carolina side where we are located (22 miles across the park as the crow flies) escaped most structural damage, and thanks to the hard work of firefighters from all over the country and the absence of high winds, there were no associated deaths. The stone fire tower at Wayah Bald lost its wooden cap to the flames. Wesser Bald Fire Tower, with its metal framework and wooden platform at the top, somehow
w 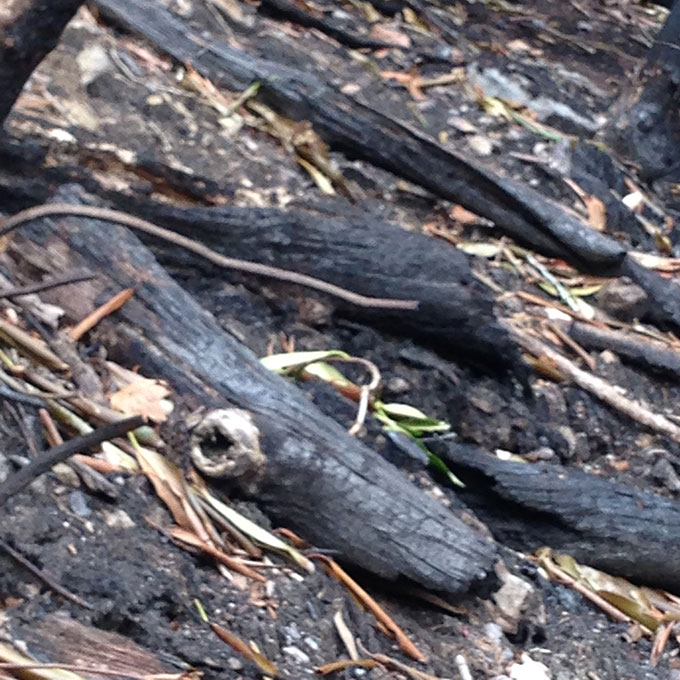 as spared. We headed that direction because it would provide a 360-degree vantage point for seeing where the fire had burned.

We started on Wesser Creek Trail, where a rich cove forest gave way very soon to a classic acid cove forest, thick with rhododendron. At first there was little sign of fire, but as the trail grew steeper and we headed toward the junction with the Appalachian Trail, the charred trunks of trees were everywhere. Unlike the raging inferno of the Chimney Tops fire in Gatlinburg, the Tellico Fire was primarily a ground fire, burning leaf litter and leaving the tree canopy largely intact. Many rhododendrons were black near the ground, with green leaves at the crown and curled brown leaves in between. Some had nothing but brown leaves, and we wondered if they would survive. Of many trees that were down before the fire, nothing remained but charcoal skeletons. The earth next to the trail was sometimes a mosaic of green and brown rhodo leaves against a black background. Leaves of oak and

other deciduous trees lined the trail itself, having fallen in the first big rain after the fires were largely contained. One of the concerns of the firefighters was that the lack of rain had left so many leaves on the trees that they continued to fall as the fire burned, constantly supplying fresh fuel. The smell of smoke still hung around the burned wood.

In our “neck of the woods,” many friends and family were on evacuation alert for weeks, with vehicles packed and ready to move at a moment’s notice. One luthier we know moved all the instrument-making tools and materials out of his shop well in advance, just in case. Although our office is three miles from where the fire was, with a lake in between, the smoke was at times so thick it was not safe 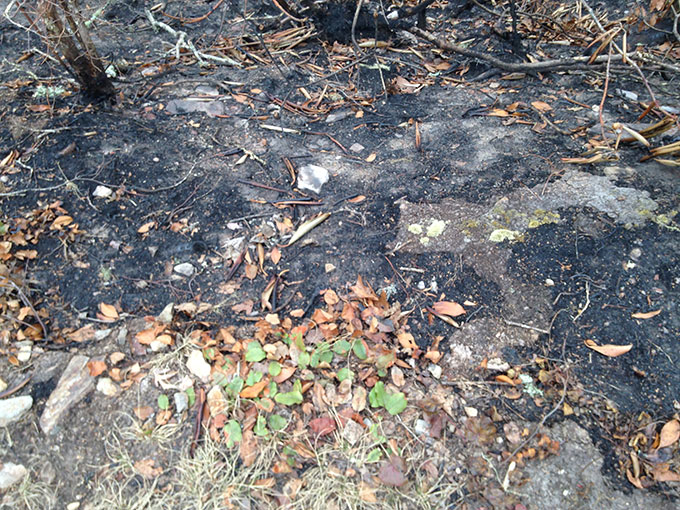 As we approached the AT, the ground became barer and blacker and the trail grew steeper. On the ridgewalk to the tower from Wesser Bald Shelter, we could see how the fire had burned right up to the ridgeline. One side or the trail was charred black, the other the typical brown you see here in winter.

The wind was bitter as we climbed the fire tower steps, wearing  the jackets we’d shed during the warming climb to the ridge. To the northeast—almost due north—we could see exactly where the fire had been, with large burn spots on a near ridge by the Little Tennessee River. At one point the fire had actually crossed the river. Black patches stood out in the brown forest. Beyond them, far ridges receded into blue. The wind whipped. To the west we could see a fast-approaching snowstorm, with menacing white clouds rolling toward us. It was starting to flurry. Time to head down.

We stopped briefly back at the shelter to wolf down our trail lunch, and then we were back on the trail, on our return looking at all the scorched earth from a different perspective. We reminded ourselves that because this ground fire fed mostly on leaf litter,  the flora would bounce back relatively quickly. Most of the trees will survive, and in spring Wesser Bald and 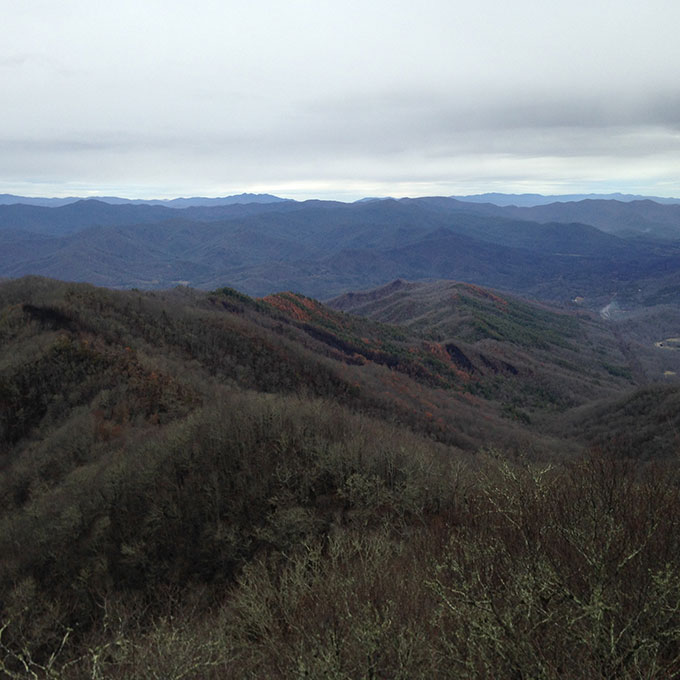 the forest around the trails will be new and green again, the charred remains of downed trees mostly obscured by the new growth. The jury is still out on whether the fire itself was caused by humans, but in this case it is fortunate that a ground fire can be beneficial for a forest, reducing fuel for future fires that could truly devastate the landscape. For us, surveying the damage was informative and  reassuring, and gave us another reason to be grateful for basic blessings of intact homes and clean air, as we reach the end of a turbulent year and close the door on the fires of 2016.

For detailed hiking maps and  directions to Wesser Bald  fire tower, take a look at Backpacking Overnights by Jim Parham, or Hiking the Carolina Mountains by Danny Bernstein.