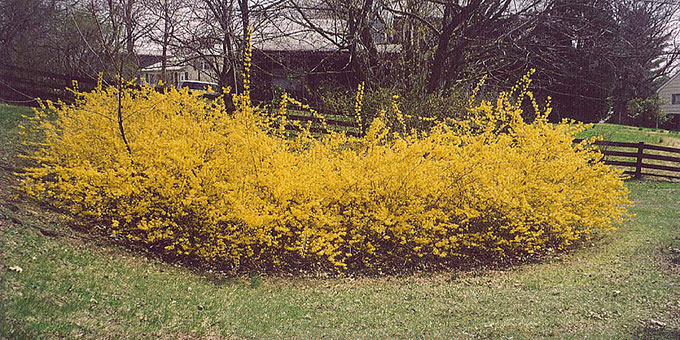 A recent post about flowers that mark old home places in the Southern Appalachians mentioned the early spring-flowering shrub forsythia. Like daffodils, forsythia blooms are golden, making bright spots in the woods where cabins and farmsteads once stood. Like daffodils, forsythia are not wildflowers, but nevertheless are tough specimens that thrive where they are planted, whether humans tend them or not.

Forsythia is an interesting shrub. It belongs to the olive family, originated in Asia, and appeared in European gardens by the mid 19th century. American hybrids were developed around the time of WWI; several species are found in this country. Although it is sometimes called “golden bell,” its most common name is the same as its latin genus name, after Scottish botanist William Forsyth (1737-1804), who was head royal gardener and a founding member of the Royal Horticultural Society.  Its branches are used to bow a Korean stringed instrument called the ajaeng.

Forsythia flowers bloom well before its green foliage appears, and the blossoms withstand snow and freezing temperatures without damage, unlike the tender leaves. Propagation is easy, too—cuttings taken from a parent plant have been known to root and grow after simply being stuck in the ground. All of which makes it the perfect low-maintenance, ornamental dooryard plant for a mountain cabin in the woods.