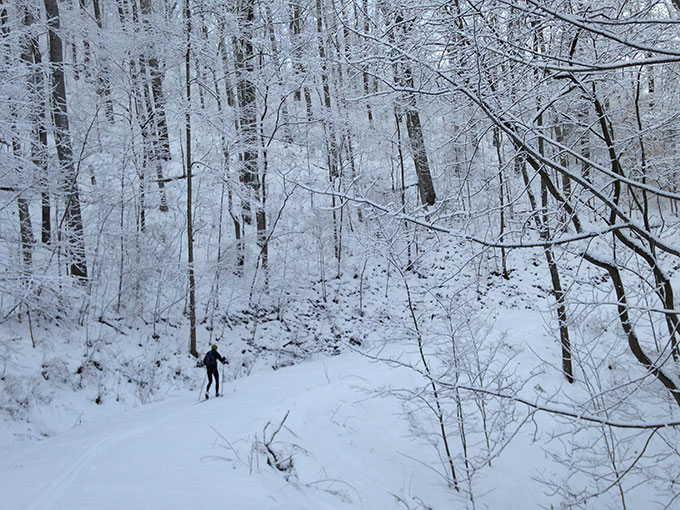 If the prolonged power outage is rarer in western North Carolina than it used to be, perhaps it’s because in the last decade the winters have been bringing us less snow. But last weekend we had a nearly perfect storm—for cross-country skiing, that is. A “wintry mix” of rain and sleet on Friday froze overnight, followed by several inches of drier powder. By Saturday morning the ridges across Fontana Lake in Great Smoky Mountains National Park were finely etched with white, and previously camouflaged snowbirds on the ground and even pileated woodpeckers in the trees were clearly visible outside our kitchen windows. There was still a shower of fat flakes coming down in snow-globe style.

I had planned to spend some screen time catching up on book editing that didn’t happen while the power was out on Friday, but when conditions look perfect, it’s hard to pass up skiing in the Smokies. We hauled out our touring gear—vintage fish-scale, three-pin-binding models that definitely qualify as “rock skis”—put on outerwear over base layers, and ventured out for a trial tour, wondering if there would actually be enough snow on the trail.

Five minutes up the highway across from Tsali Recreation Area, Horse Branch Road (a road Jim regularly rides on his mountain bike) turned out to be the place. We followed the gated road under a canopy of hardwoods, each bare branch outlined with a layer of white. Clouds passed overhead showing an occasional patch of blue; the storm was blowing out. Every once in a while a curve in the road opened up a partially limited view and we’d feel the sharp wind as we gained 400 gentle feet of elevation over two and a half miles.

Everything is quieter under a blanket of snow. I’m not sure whether we first heard or saw the gray flutter on the side of the trail, but something seemed tangled in the brush and couldn’t get free. When we stopped to look closely, we saw a small bird was actually frozen to a bush, frantically beating its wings upside down. I reached out, caught it loosely in my gloved hand, and broke from the bush the twig it was frozen to—but the bird was still attached to the twig by a marble-sized lump of ice. Jim carefully held the ice lump between his bare fingers, leaned close, and breathed on it; in a few minutes the lump was melted. The little bird, which had stayed motionless through all of this, sat in my open-gloved palm for a few minutes more before fluttering off into the underbrush. We could only guess it had been frozen to the branch during the wintry mix part of the storm as temperatures had fallen overnight. We didn’t get pictures, but it appeared to be a female American redstart, a species that winters in this region. We kicked on up the road for another 30 minutes before turning back toward the car; it took us only half an hour to glide down.

If good ski snow is rare here at our elevation (approximately 1,700 ft.), even rarer is snow that stays around long enough for decent ski conditions two days in a row, but this time lightening struck twice. Overnight temperatures were in the low teens, and we returned to Horse Branch the next day knowing we had limited time before the snow deteriorated. There was not a cloud in the sky. Wind had blown snow over our tracks so that, while still visible, they were covered with a thin layer of powder that sparked in the sun like silver glitter. At the overlooks the previously weathered-in views were clear, and Jim traced the route of the Appalachian Trail along a far ridge with the tip of his ski pole.

But then, as expected, the snow began to change. It was already above freezing and anywhere the sun hit, our skis dragged. Time to turn around before things got slushy. In the shade the return downhill was still fast, and a small gray bird followed us near the place where we had made the ice rescue the day before, defending its territory; we wondered if it was the same one. Too soon for us, yet just in time, we were back at the car and headed down the road for home. The book edits would just have to wait until Monday.

Yesterday we woke to snow. In the afternoon, we saw trailing arbutus in bloom. This…