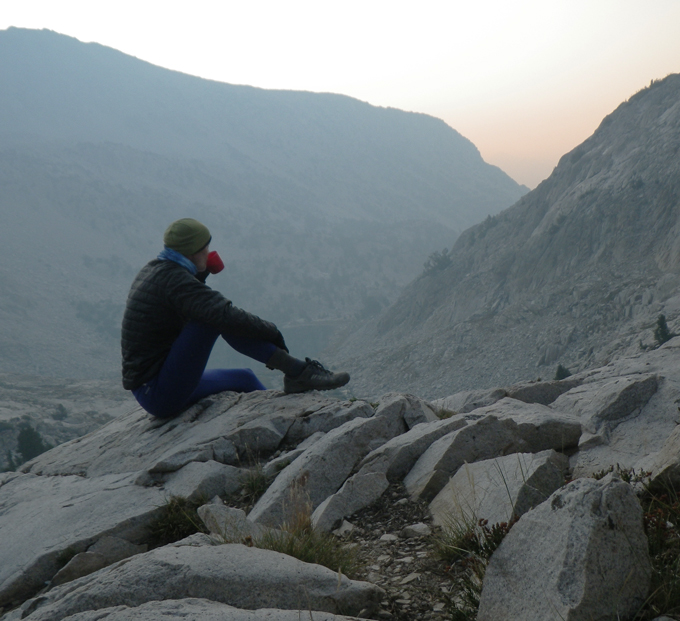 Over the course of a year, I spend a lot of time in the backcountry. Many a night I’m sleeping on the ground or suspended between two trees in my hammock. I love it, and I swear it’s much better for my back than the most expensive mattress. Even after all these years, though, I still don’t sleep really soundly in the woods. I’ve usually got both eyes closed, but one ear open. This is probably the result of so many overnight outings with young charges sleeping nearby. Still, in the morning I’m almost always refreshed and ready for a day of adventure.

I’ve always tended to be an early riser, and when in the woods it’s something I really look forward to. Don’t get me wrong—I’m not one to get up eagerly when it’s still pitch black, but to me that hour before the sun crests a nearby mountain is the best part of the day. If you’ve never spent a night outside, this is the dawn of the day. It’s the time when all the birds, insects, and animals of the woods wake up too. My routine is this: I’ll get up and stuff my sleeping bag and roll up my ground pad. Then I’ll fire up my stove and boil some water for black tea. I have a half-liter bottle that I’ve insulated that works perfect as a brewing pot. Once the tea is ready, I pour it into my favorite plastic mug (acquired in New Zealand; just the right size), add a little powdered whole milk, and find a nice place to sit. Then I just soak up the serenity of the morning. Often there is a great view or I can hear identifiable birds making their morning calls.

Recently I returned from a week-long backpacking trip in Yosemite National Park, where I led I a small group of teenagers from Falling Creek Camp for Boys, based in Tuxedo, North Carolina. This was the kind of trip where the leader is “on” for literally 24/7, and I was really looking forward to those early morning tea breaks. The first morning out on the trail went as expected. It had been a challenging descent into the Grand Canyon of the Tuolomne the day before, and I rose alone and drank my tea by the river in the quiet hour before the sun lit the canyon floor.

Just as I was sipping up the last few drops, I noticed several of the boys were awake and watching me. They wanted to know if they had tea in their bear canisters (they did). Could I wake them up the next morning when I got up? After a brief struggle with my selfish inner self, I said sure. As expected,  the next five days I was up early every morning at dawn, boiling pot after pot of water, for cup after cup of early morning tea. Was it the same serene sunrise I’d reveled in the day before? Not even close. My young companions broke the silence with plenty of teenage chatter. Would I do it the same way next time? Absolutely. The chance introduce them to a rare and cherished ritual more than made up for any quiet time I lost. I know I’ll have many more mornings of solitude in the backcountry. For five boys, it was a first-ever experience, one I hope they will carry with them well into their adulthood.

Jim Parham is the author of more than a dozen trail guides for hiking and bicycling, including Backpacking Overnights: North Carolina Mountains & South Carolina Upstate.

Milestone Press may be an outdoor publisher, but not all our work—and not all our discoveries—happen…

Our friend Hawk Hagebak Hawk hails from Atlanta, and his love for the Southern Appalachians brings him and…

How to Choose An Overnight Hike

September is just around the corner and cooler weather is on the way.  Jim Parham's…