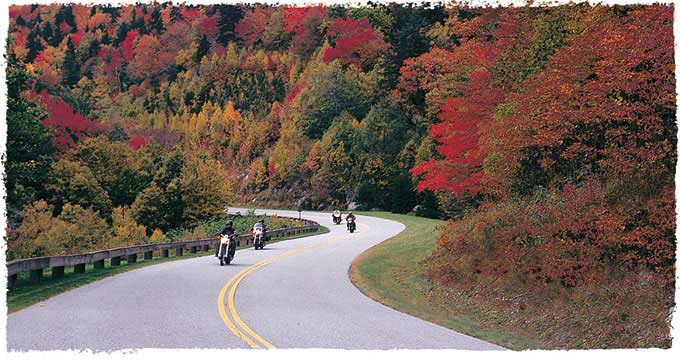 Autumn is upon us, and it  can be the absolutely best season for motorcycle touring: cool weather, clear skies, breathtaking fall foliage. With that in mind, we’re sharing some tips from Hawk Hagebak, author of our Motorcycle Adventures guidebook series, taken from his own “Code of the Road” for motorcyclists.

1.  Don’t forget to wave. There are at least five different kinds of waves for motorcyclists, depending on who you’re waving to, what the traffic is like, and the challenging level of your route. They range from the exuberant  “I’m #1” wave, indicated by an uplifted arm with an extended index finger, to the “I’m too tired to wave, so I’ll just lift my fingers from the handlebar” wave—also often used when the rider busy with “cockpit management” and paying close attention to the road ahead. Regardless of how and to whom you wave, it’s important to make the effort, if not to acknowledge other motorcyclists, then to perpetuate the allure of motorcycling in the eyes of the motoring public.

2. Breakdowns happen; it’s how you deal with them that counts. If you break down on a ride, place your helmet behind the bike near the road so other motorcyclists can identify you as a breakdown. Accept help for gas, phone calls, and loose equipment, but unless you know the other rider really well, don’t let anybody but a mechanic work on your bike. If you decide to stop and help a fellow motorcyclist, be careful, and don’t hesitate to give the police a call if you feel the least uneasy.

3. Appreciate the art of a good story. Have the patience to listen to a few tales from the road; you could learn something. Sure, you may have to endure a bit of hyperbole and embellishment, but in the process you might hear about a superb stretch of highway, or a better way to take a certain type of curve. Regardless of your experience level, you can almost always learn something new from other riders. And don’t forget to tell a few stories of your own. If you keep them light, entertaining, and even a little self-depricating, maybe others can pick up something from you as well.

4. Dealing with laws—and The Law. Traffic laws are bent and broken by nearly everyone. But laws are elected representatives’ attempt to make the world a safer place for us all. If you hate a certain law, ask your representative to change it or get a new representative, but don’t get upset when the law you really hate is enforced on you. Law officers don’t make the laws, and they may even dislike some of them as much as you do. You may believe that regulations for speed, passing zones, and recklessness should not apply to you, because, hey, you can handle anything on a bike. But while your skill won’t be debated, these laws do and will apply to you because of the others with whom you share the road. So remember—before you twist your way through the mountains at speeds Captain Kirk would be proud of—that you share the asphalt with drivers ages 15 to 85. Set the example, have fun, don’t get hurt and don’t hurt anyone else.

5. Respect the property of others. On the road you’re sure to see nice homes and interesting scenery. Don’t trespass, even if you think you’re in the wilderness. Check with an owner about looking at his house or petting his horses. By building good relations with the locals, you’re paving a smooth road for motorcyclists who will follow you.

6. Pass and be passed. There is no race on the open road. The only thing we win at the end of the day is a safe trip to remember. So if you’re a fast rider, pass others carefully and don’t tailgate. If you’re slower, let the faster guys know it’s okay to pass you. Flag them around or pull out to let them by.

7. Take the litmus test. Ask yourself this: if someone who wasn’t a motorcyclist saw the way you were acting while you rode your bike, would they want to share the sport with you, or would your behavior push them away from motorcycling? The world will be a better place when it’s just motorcycles on the road. But in the meantime, be nice and be safe.

Read more of Hawk Hagebak’s “Code of the Road” in any of his three motorcycle guidebooks.

This week marks 25 years since we opened our publishing doors in 1991. That made us…

Our friend Hawk Hagebak Hawk hails from Atlanta, and his love for the Southern Appalachians brings him and…

One thing we know is true: the minute you publish a touring guidebook with information…