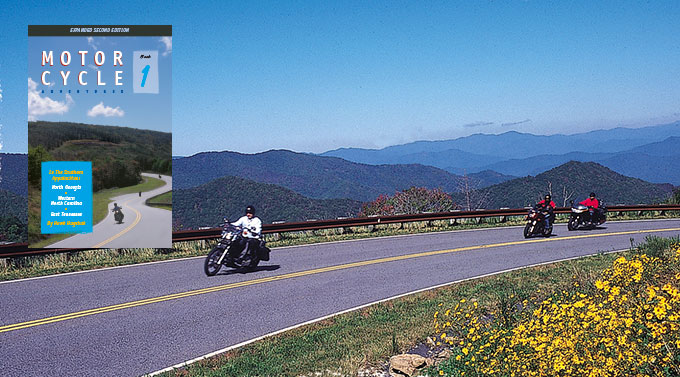 One thing we know is true: the minute you publish a touring guidebook with information on attractions and amenities, that information will change. Even if the routes remain the same, a restaurant will be sold and reopen as a gift shop, a museum or gas station will close, a motel might even burn down–it happens!

Back in 2001, we published a new kind of adventure guidebook–a motorcycle touring guide by a metro-Atlanta police sergeant named Hawk Hagebak. That first guide soon bloomed into a three-book series covering the southern and central Appalachian mountains, and quickly became the go-to resource for two-wheeled tourists wanting to explore the region. Hawk updated two of his books in 2009, but his fans have been requesting a true revision for several years now.

Today, we are happy to announce the expanded second edition of Hawk’s first book in the series, Motorcycle Adventures in the Southern Appalachians: North Georgia, East Tennessee, Western North Carolina. The new edition includes all the excellent original rides, with updated information on lodging, dining, and some new motorcycle-only resorts. Information on visiting destinations like Chattanooga TN, Helen GA, and Highlands NC is still there, along with a brand new ride in north Georgia called Copperhead Loop. You’ll also find updates on route changes and road conditions.

Hawk is a police captain now, and he says these days he wears a full-face helmet while on his bike. But given the number of years that have passed since his first book was released, it’s remarkable how much hasn’t changed about the great motorcycle routes in his books. Most of all, you can still count on his sound and reliable motorcycle touring information, liberally sprinkled with his own special brand of humor and practical advice. You can view the new edition and read more about Hawk on our website.

Archives
Categories
Milestone Press books are sold at outfitters, bicycle and motorcycle shops, and selected book and specialty stores across the Southeast.
Buy Our Guidebooks
© 2021 Milestone Press, Inc. | An Engenius website.
Back To Top
Posting....